A Complete Visitors Guide to the Terracotta Warriors

The Terracotta Army – one of the most spectacular archaeological discoveries of the modern era. It seems remarkable that it lay undiscovered until 1974 when a group of Chinese farmers unearthed this awe-inspiring sight.

Lying 20 miles east of Xi’an is a dry and scrubby land, planted with persimmon and pomegranate. Desolate and cold in winter, dry and hot in summer this is no place for an Emperor to live. Let alone the location for the man who unified China, standardized its currency and built the Great Wall, to be buried. Yet, it is home to the largest burial complex in the world. A 6,000 strong army of warriors each standing tall, equipped with their own armour and ready to protect Qin Shi Huang from the horrors of the after world. Stationed in military formation, it is believed by historians that it would have taken some 700,000 workers nearly three decades to create the mausoleum. A space of 20 square miles has been excavated but it is not only an army of terracotta warriors that Emperor Qin felt he needed. Numerous horses, chariots, cavalry and infantry are just some of the vast array of protection that he sought to provide himself with.

A painstaking restoration of the army has revealed that they were created using moulds and an early assembly-line construction. Though most of the warriors have identical hands, only eight moulds were used to shape their heads and further distinctive surface features were added with clay after assembly. An extreme level of artistry and craftsmanship is therefore on show as a result of each terracotta soldier appearing to have slightly different facial features. Hats, moustaches, beards and ears all seem to offer each warrior their own personality, although historians do not think that they were based on existing people. The fact that each sculpture has had no detail neglected means that their documentary value is huge. They provide a unique look at the crafts and techniques that would have been on show by potters and bronze-workers during the time of the Warring Kingdoms (475-221 BCE) and that of the short-lived Empire of a Thousand Generations (221-210 BCE). 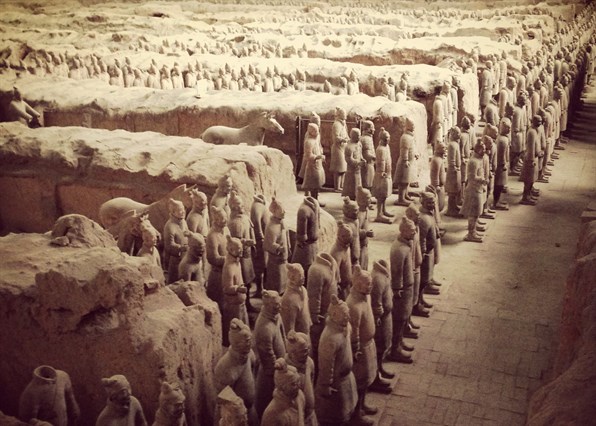 The army took with them some 40,000 bronze weapons, including battle axes, crossbows, arrowheads and spears. Even after 2,000 years underground these weapons have remained extremely well preserved. Revealing the particular sophistication of Chinese metallurgy and the protective chrome plating that was used.

However, the Emperor’s Tomb itself is still a relative mystery, with less than 1% having been excavated. Specialists are reluctant to go any further with the digging amid fears that what lies beneath could be irreversibly damaged. As well as this, it is believed that mercury streams were inlaid in the floor of Qin’s burial chamber to simulate local rivers running through his tomb, therefore creating an unsafe environment for anyone working on the site.

There are three main pits that are easily accessible to the public and are enclosed inside the four-acre Museum.

Pit One is the largest covering 14,000 square metres and focusing on infantry and chariots. Front and centre is a vanguard of un-armoured archers, three rows deeps, behind which are 11 straight lines of armoured warriors interspersed with war chariots and horses. Each chariot has a driver, with distinct uniform, and two additional warriors. This formation reflects the organisation of the Chinese military at the time.

Similarly, to Pit One, Pit Two is made up largely of archers and again their formation reflects how the army would have approached a warring situation. By having one line of warriors firing, and the other kneeling to reload, a steady stream of fire could have been kept up against the enemy. The main attraction of Pit Two is its some 80 war chariots. As well as this, a squadron of cavalry has also been introduced. The saddled horses are all male, life-size and each carrying a rider.

Pit Three is by far the smallest and used as a command post, with an honour guard. At the centre of which stands a grand command chariot which is beautifully painted and features an intricately ornate canopy.

The Terracotta Army is a sight that can be visited year round. Winter is dry, cold and with a poorer air quality – however it is also low season so there are far less crowds. The mausoleum is the largest preserved site in China and its format echoes the geography and plan of the ancient Chinese capital, Xianyang. It is an example of complete authenticity and integrity. The grave mound, sites of construction, burial tombs and burial pits truthfully maintain their original location, material and formation.

The Terracotta Army is a short one-hour drive from Xi’an. Xi’an is accessible from many of China’s other main cities.

We provide the unique opportunity to have a privately guided tour of the site which offers total flexibility and personal service. It is easy for your personal guide and driver to transfer you from your hotel in Xi’an to the Mausoleum, avoiding public transport and any crowds. Our favourite place to stay in Xi’an is the Sofitel Legends Hotel. An iconic building that was opened in 1953 and provides a harmonious blend of French flair and Chinese hospitality.

The detail, originality and history that the Terracotta Army provides makes it an unmissable destination for anyone. It is hard to believe that archaeologists think that what they have uncovered so far is a mere drop in the ocean of what China’s first emperor had prepared for the afterlife.

For more information or to start planning your tailor-made holiday to China, please get in touch with us:

Without question, you put together the best trip I have ever taken. We were shown around like visiting dignitaries, the hotels were fantastic and the itinerary was just right. Everybody I know will hear about how amazing Ampersand is!
- Leslie Siben, India
Ampersand’s preparation, attention to detail and interaction before and during our trip show exactly why good travel agents have a role in today’s internet booking age. They were a delight to deal with!
- Mr David Wallace, North India
Everything you did for us whilst we were away was hugely appreciated, and Ampersand has been exemplary in every way. I'll always recommend you!
- Mr Richard Stoughton, Sri Lanka
Ampersand provided a bespoke and flexible holiday, tailored to my every whim. Their highly professional staff had only one goal which was to arrange an exceptional holiday and some unforgettable experiences in India. I have no hesitation in fully recommending them and they will be the first company I approach in the future - 10/10
- Anonymous, India
We had a wonderful holiday - everything was perfect. Thank you for helping us to make a thoughtful plan to enjoy and make most out of our trip. The places we visited, the guides, the transportation and driver, the hotels selected... Everything was great!
- Jaime Benitez, South India
I thought the Ampersand team was outstanding. We couldn’t have hoped for anything more.
- Mr Geoffrey Johnson, India
Difficult to articulate just how good the service from you and your team really was. We know you will continue to do well and hope we have the chance to seek your assistance again before long.
- Mr & Mrs Manson, North India
I had a very lovely time and was looked after splendidly. My first visit to India could not have been better, save for being longer! But I shall return at some point and I shall look to you to make the arrangements.
- Matthew Nicklin, North India
So many highlights to choose from! The hotels were amazing but Maya Villa was a highlight… I loved just hanging out in the hammock reading my book and watching the peacocks chase the cows!
- Krista Weir, Sri Lanka
I would recommend Ampersand without any hesitation!!! The best travel agent that I’ve ever had. Everything – from the individual care and attention in planning the trip, through to the efficiency of the agents on the ground in India – was handled brilliantly. An absolutely first-class service all round!
- Matthew Annable, Rajasthan, India