‘One painting is the description of a thousand words’, so goes the old Rajasthani saying. To the artists of the Hindu temple town of Nathdwara, Rajasthan, nestled in the Aravalli Hills, art has been a traditional way of depicting sacred scenes to devotees without language. Hinduism is rich in imagery of gods, conveying and narrating its tales to countless illiterate worshippers over the centuries and producing many schools.

The school here is one of the most celebrated and distinctive in India, increasing Nathdwara tourism. A community for over three hundred years, its paintings are sought after by collectors the world over. This tight-knit collective can be found in the ancient houses of the town’s ‘Chitrakaron ki gully’ or ‘artists’ street’. There are only ten to twelve original painters left and they are holding out against the march of time and technology in an effort to preserve what they see as a divinely ordained vocation, making now the best time to visit Nathdwara. 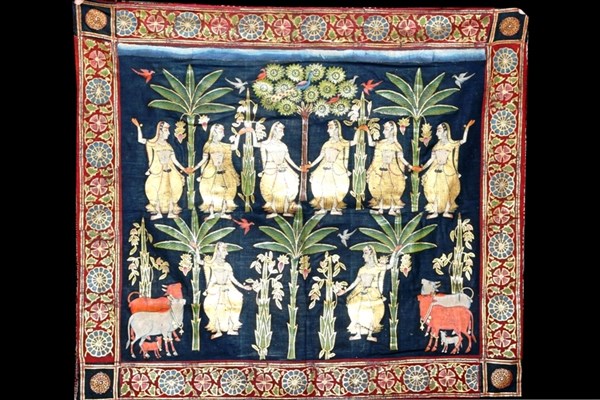 First established in 1672, the school, according to legend, was founded by priests and artists of the Pushtimarg (‘Way of Grace’) sect escaping persecution from the Mughal Emperor Aurangzeb. They were transporting an idol of Lord Shrinathji, an incarnation of the seven-year-old Lord Krishna, in a bullock cart to protect it from destruction when the cart sank deep into the mud at a tribal village. This was taken as a sign by the head priest and a temple for the deity was duly built, the sect living under the protection of the powerful Maharana of Mewar. The bullock cart is still to be seen at the temple, which has itself survived numerous attacks from other clans. Since then the history of Nathdwara (‘Gate of the Lord’), 43 km from Udaipur, has been both a place of pilgrimage and a hive of artistic industry, the aforementioned Shrinathji Temple Nathdwara now even having its own mobile app.

Many of the artists descend from the original band of holy refugees, and produce iconic pieces such as the world-famous Pichwai paintings. Traditionally used to show tales from Lord Krishna’s life, Pichwai (literally meaning ‘backdrop’) pictures are painted on cloth on a large scale and placed behind idols in Nathdwara temples and homes. Each painting is revered as an expression of the artist’s love and affection for his god. The works can take three to nine months to complete and are full of symbolism and detail. 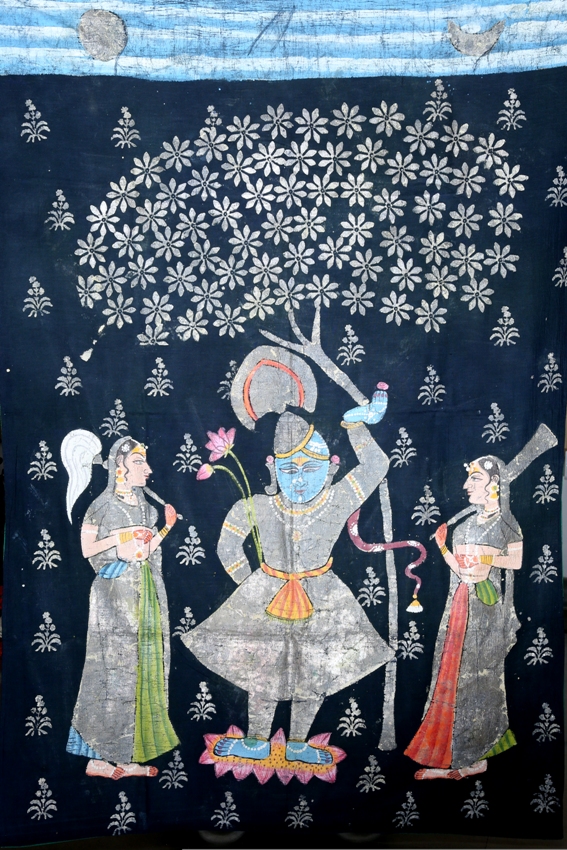 Lord Shrinathji is depicted in opulent settings, showing scenes or ‘Leelas’ from his life. He is shown with his left hand raised and the right hand resting at the waist, with a large diamond placed beneath the lips which is known as chibuk. The original temple deity is carved in black marble with images of two cows, lion, snake, two peacocks and one parrot engraved on it as well as accompanying sages. Precious jewels, some dating back to pre-Mughal period, adorn it along with ancient embroidery and threadwork. This lavish decoration is replicated in the Pichwai art with glorious gold embellishments and riots of colour surrounding the ebony figure. The backgrounds feature lush vegetation, cavorting milkmaids, and blissed-out musicians in an intricate weaving of culture, costume and sacred lore. The adult Krishna also appears, a radiant blue, standing on a Lotus flower and playing his flute which summons all to worship him. The bright hues were traditionally created from vegetable extracts but now largely replaced by mineral dyes. The celebratory atmosphere in the paintings reflect the sect’s belief that salvation is found in the joys of earthly life.

Parmanand S. Sharma is a sixth-generation artist and his days are, from the first dawn offering of water to the Sun, devoted to what he calls ‘revolving around the Lord’. His life, like those around him, is soaked in history and storytelling. ‘Pichwai paintings were made by our forefathers based on the songs sung in the temple or tales from the High Priest, the imagery was then replicated and sent to the temple for approval before being brought to life’. But times are changing and demand is growing for cheaper, mass produced art. Sharma’s son Neelesh adds, ‘the process is time-consuming and intricate, and we are pitted against modern embossed art’. The predecessors of artists such as the Sharmas painted with ‘a lot of patience, almost meditatively’, and from the paint-spattered, atmospheric studios, a profession under threat from the modern world is still defiantly producing works of art that can only be described in one word – celestial.


For more information or to start planning your tailor-made holiday to India, please contact us:

Difficult to articulate just how good the service from you and your team really was. We know you will continue to do well and hope we have the chance to seek your assistance again before long.
- Mr & Mrs Manson, North India
I had a very lovely time and was looked after splendidly. My first visit to India could not have been better, save for being longer! But I shall return at some point and I shall look to you to make the arrangements.
- Matthew Nicklin, North India
I thought the Ampersand team was outstanding. We couldn’t have hoped for anything more.
- Mr Geoffrey Johnson, India
So many highlights to choose from! The hotels were amazing but Maya Villa was a highlight… I loved just hanging out in the hammock reading my book and watching the peacocks chase the cows!
- Krista Weir, Sri Lanka
I would recommend Ampersand without any hesitation!!! The best travel agent that I’ve ever had. Everything – from the individual care and attention in planning the trip, through to the efficiency of the agents on the ground in India – was handled brilliantly. An absolutely first-class service all round!
- Matthew Annable, Rajasthan, India
Without question, you put together the best trip I have ever taken. We were shown around like visiting dignitaries, the hotels were fantastic and the itinerary was just right. Everybody I know will hear about how amazing Ampersand is!
- Leslie Siben, India
Ampersand’s preparation, attention to detail and interaction before and during our trip show exactly why good travel agents have a role in today’s internet booking age. They were a delight to deal with!
- Mr David Wallace, North India
Everything you did for us whilst we were away was hugely appreciated, and Ampersand has been exemplary in every way. I'll always recommend you!
- Mr Richard Stoughton, Sri Lanka
We had a wonderful holiday - everything was perfect. Thank you for helping us to make a thoughtful plan to enjoy and make most out of our trip. The places we visited, the guides, the transportation and driver, the hotels selected... Everything was great!
- Jaime Benitez, South India
Ampersand provided a bespoke and flexible holiday, tailored to my every whim. Their highly professional staff had only one goal which was to arrange an exceptional holiday and some unforgettable experiences in India. I have no hesitation in fully recommending them and they will be the first company I approach in the future - 10/10
- Anonymous, India