The London Design Festival held every September brings together the brightest creative talent from across the globe to share, nurture and celebrate design inspirations past, present and future. Ten years from its inception, the festival has grown far beyond its original borders and fringe events featured in most corners of the metropolis. Highlights of this year’s festival included the unveiling of Burberry and The New Craftsmen collaborative Maker’s House in Soho, based around the iconic Virginia Woolf novel Orlando. On a larger scale, Somerset House played host to the ever-expanding Design Biennale featuring captivating installations from all over the globe.

Established and emerging Indian design talents were also given a platform in a first for the festival. Shoreditch’s Old Truman Brewery was the site for ‘This is India’ Pavilion. Festival organiser Jimmy McDonald explained the reason for choosing India, “We at LDF have been watching with great interest the number of new independent designers and studios from there making in-roads into the global design scene”.

The exhibition of 10 stands, curated by the visionary Spandana Gopal of lifestyle brand Tiipoi was created in partnership with designer Kangan Arora. They brought to life a visual spectacle paying homage to the “ancient astronomical instruments and jagged geometries” of the Jantar Mantar in New Delhi, 13 star gazing instruments built for a Rajasthani prince in 1724. “Experimentation and openness” were the themes, according to Arora, who transformed the pavilion space with more than 500 half-painted terracotta pots stacked up in colonnades and stands for the exhibitor’s works. Arora is excited about the changes afoot, both of perceptions to Indian design, and what the creative scene is evolving into, commenting, “Contemporary Indian designers are taking the craft, the traditional ways of making things and the plentiful resources of India and being freshly inspired”, she continues. “But they are doing so with a modern sensibility. And the two things can exist together. This is what we are so excited about”. 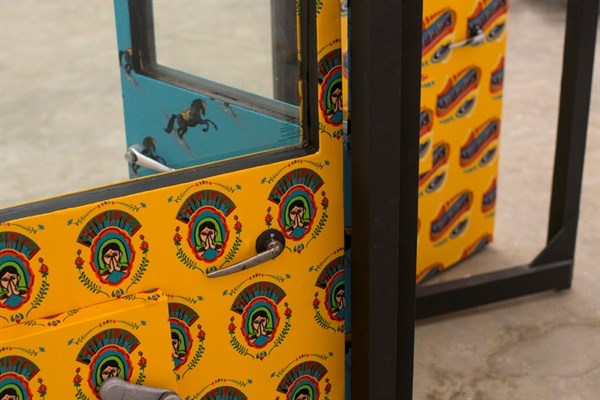 Taking everyday elements of Indian life, the metals and the mud, and weaving them into an intriguing narrative was a prominent theme throughout. Cobalt Designs drew attention with a diminutive but distinctive copper jerry can and a noughts and crosses punctuated brass stool – designs taken from the tools of street life. The textile design scene was represented by, amongst others, Mumbai-based Taxi Fabrics whose jauntily hued offerings have decked out scores of real-life taxi cab interiors. This marriage of design and reality even made an appearance in the recent Coldplay video with lead singer Chris Martin being shown seated in one of the taxi interiors created by Pakistani artist Samya Arif. Also showing was Safomasi, a duo whose Japanese-inspired ‘Festival Quilt’ was recently lauded by the Telegraph Magazine. Safomasi’s visual magic lies in the simple fact of all the characters and elements in the design having a story behind them, spotted at different festivals and processions on their travels. New York/Delhi-based Leah Singh spoke of working directly with village artisans to produce vivid fabrics featuring geometric patterns that blur the lines between contemporary and traditional.

Renowned sculptor Aman Khanna of Claymen staged a ‘silent protest’ with a bevy of playful ceramic fiqures and a covetable set of glazed feet. Khanna urged visitors to 'Let the Claymen look at you, and use them to look at yourself,' creating an interactive dynamic that was pleasingly silent in today’s chattering world. 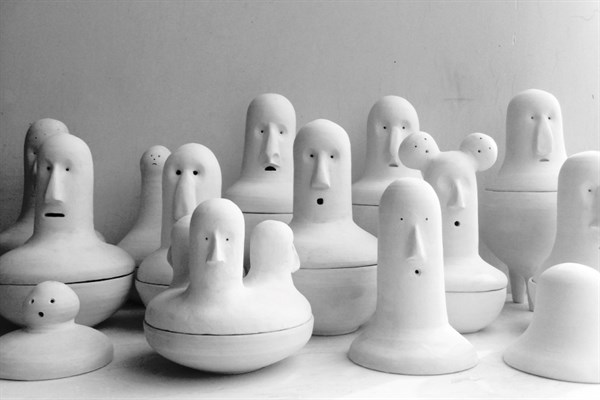 This infusing of the personal experience, rather than trend-following defined each brand in the pavilion, who collectively revealed the unique experience of designing in a country as rich, challenging and diverse as India in a fresh and vibrant way.

Over at stately Somerset House, London Design Biennale also saw India highlighted at an inaugural installation. India Design Forum Founder Rajshree Pathy ensured their presence at the show was as memorably dramatic and thought-provoking as India herself.

Named 'Chakraview’, the installation was based around the chakra system - a philosophical journey that begins with desire and consumption, moves to emotion, then speech, and, gloriously, to enlightenment. Pathy also envisioned it as a metaphor for India’s progress since gaining independence in 1947.

Six silk tapestries drew eyes above a mirrored floor and bathed visitors in an evocative sense of chaotic colour. An adjoining blue audio-visual space represented the seventh and most spiritual chakra. This mingling of the courageous and the exotic summed up all that is to be celebrated in Indian design. Boundaries are being pushed in a uniquely millennial exploration right into the heart of what it means to be Indian and how this is translates in our age – events such as London Design Festival bring that dynamic to our doorstep and offers us a tantalising glimpse into this most exciting of identity evolutions.

I had a very lovely time and was looked after splendidly. My first visit to India could not have been better, save for being longer! But I shall return at some point and I shall look to you to make the arrangements.
- Matthew Nicklin, North India
Everything you did for us whilst we were away was hugely appreciated, and Ampersand has been exemplary in every way. I'll always recommend you!
- Mr Richard Stoughton, Sri Lanka
So many highlights to choose from! The hotels were amazing but Maya Villa was a highlight… I loved just hanging out in the hammock reading my book and watching the peacocks chase the cows!
- Krista Weir, Sri Lanka
I thought the Ampersand team was outstanding. We couldn’t have hoped for anything more.
- Mr Geoffrey Johnson, India
Ampersand provided a bespoke and flexible holiday, tailored to my every whim. Their highly professional staff had only one goal which was to arrange an exceptional holiday and some unforgettable experiences in India. I have no hesitation in fully recommending them and they will be the first company I approach in the future - 10/10
- Anonymous, India
Without question, you put together the best trip I have ever taken. We were shown around like visiting dignitaries, the hotels were fantastic and the itinerary was just right. Everybody I know will hear about how amazing Ampersand is!
- Leslie Siben, India
Ampersand’s preparation, attention to detail and interaction before and during our trip show exactly why good travel agents have a role in today’s internet booking age. They were a delight to deal with!
- Mr David Wallace, North India
Difficult to articulate just how good the service from you and your team really was. We know you will continue to do well and hope we have the chance to seek your assistance again before long.
- Mr & Mrs Manson, North India
I would recommend Ampersand without any hesitation!!! The best travel agent that I’ve ever had. Everything – from the individual care and attention in planning the trip, through to the efficiency of the agents on the ground in India – was handled brilliantly. An absolutely first-class service all round!
- Matthew Annable, Rajasthan, India
We had a wonderful holiday - everything was perfect. Thank you for helping us to make a thoughtful plan to enjoy and make most out of our trip. The places we visited, the guides, the transportation and driver, the hotels selected... Everything was great!
- Jaime Benitez, South India