Lucknow – The City of Illusions & Princes

Lucknow is the compelling and relatively undiscovered capital of Uttar Pradesh state in central India.  A tale of several cultures is woven through the city’s history and society, where the past and present mingle harmoniously and colourfully like two great rivers. It is a place to linger in, with sights such as the crumbling British Residency, an antidote to the well-trodden paths of conventional tours. 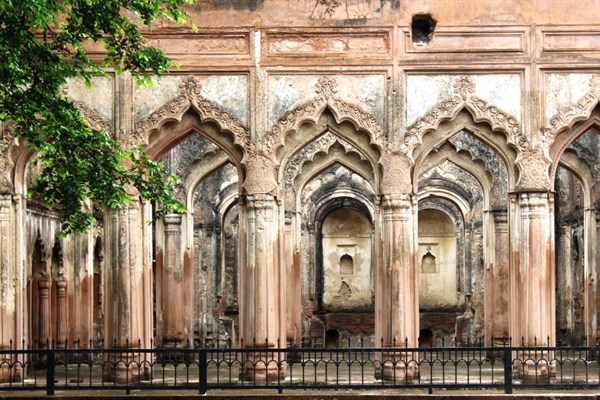 The once elaborate gardens and ruins of the Residency in the heart of the city offer a poignant glimpse into the vanished might of the British Raj. Built in 1800, the Residency was the setting for the most dramatic events of the 1857 First War of Independence, the Siege of Lucknow, a 147-day siege where thousands of lives were lost. Author Rosie Llewellyn-Jones has written extensively on the event, and Lucknow itself, commenting:

Lucknow isn’t just about the Mutiny, though it was one of the epicentres of the Uprising, as it is called now. It was a small medieval town which blossomed for 80 years under its wealthy rulers, the Nawabs, who began laying out the ‘new city’ in 1775 along the banks of the river Gomti. And being rich, the Nawabs attracted all kinds of people to their glittering Court and impressive religious edifices. Lucknow is celebrated for its imambaras – long, large buildings, always arched, that form a focus and place of pilgrimage for the Shi’a community throughout northern India.” Llewellyn-Jones adds: “Don’t leave here without visiting either the Great Imambara, or the smaller, but more elaborate Hussainabad Imambara.”

Throughout the centuries, Lucknow has produced a motley collection of ‘saints and scholars’. The local aristocracy, who wavered between sybaritic decadence and sophisticated high culture, still hold court behind the high gates of the local palaces. One such modern day ‘Nawab Sahib’ is famed filmmaker, author and fashion designer Muzaffar Ali, best known for producing the Bollywood classic, Umrao Jaan. This poignant tale of a 19th-century courtesan’s rise and fall is a moving insight into the city’s complex social mores. Ali, along with elegant wife Meera, take design inspiration from local traditions for their eponymous fashion house. The couple’s striking yellow townhouse, Kotwara House, is an homage to Nawabi culture within the Qaisarbagh Palace complex, once the stronghold of the rebel queen Hazrat Mahal. Kotwara House is open to guests who wish to experience an atmosphere that has little changed since Lucknow’s glory days. The interiors are lined with portraits and photographs of family members including Muzaffar’s father’s first wife, the Ottoman Princess Selma of Turkey. Family retainers waft in embroidered silk slippers through Tuberose-scented rooms laden with beatific smiles and breakfast here is a ceremony to long be remembered. My Lucknow with Muzaffar Ali, Raja of Kotwara

CB: Lucknow is a place that has infused your creative output since your early career. What are your childhood memories of palace life there?

MA: The onset of winters and my mother opening her trunks of clothes to be aired in the courtyard. Not a very boy-like memory but one filled with fragrance and the palace women chattering with high excitement. The fluttering dresses and shawls were full of colour and texture, and associations with festivals and parties. The local La Martinière school, where I attended, was filled with history and alive with ghosts and the music of time. It is open to visit and carries an authentic atmosphere of the departed Raj.

CB: You have worked tirelessly to raise awareness of Sufism, a mystical arm of Islam that was prominent in Lucknow, including producing the acclaimed documentary Breathe Into Me about the life of the poet Rumi. Is there still a flourishing interest in the movement?

MA: A society historically softer and gentler than the rest of India, Lucknow has absorbed all faiths with notable tolerance. Much of this is due to the Sufis and their influence in the region. The Sufi’s message of universal love still impacts hearts in poetry and music, which was all embracing. We have an active RUMI Foundation chapter which regularly celebrates this legacy through the Jahan e Khusrau Sufi Music festival and the Wajid Ali Shah Festival. This heritage is still impacting the modern generation where Sufi is a buzzword meaning ecstasy.

CB: How would you describe Kotwara House and Anhalwara Palace, your country house, 160km from Lucknow?

MA: Kotwara House and the Anhalwara Palace are living museums of local craft and culture. Each has its own character. They have grown into a very personal archive of our life’s work and family memorabilia. At Anhalwara Palace, the beautiful Kishanpur Forest, with around 20 to 30 tigers is a true off-the-beaten-track experience. Dining with the Nawabs by Meera Ali. Photographs by Karam Puri
Exquisite companion to Roli Books’ Dining with the Maharajas highlighting an enduring gastronomic legacy with lavish imagery.

The Great Uprising edited by Rosie Llewellyn-Jones
Photographic tome using rare archival photographs from the renowned Alkazi Collection and others.

I thought the Ampersand team was outstanding. We couldn’t have hoped for anything more.
- Mr Geoffrey Johnson, India
Ampersand’s preparation, attention to detail and interaction before and during our trip show exactly why good travel agents have a role in today’s internet booking age. They were a delight to deal with!
- Mr David Wallace, North India
So many highlights to choose from! The hotels were amazing but Maya Villa was a highlight… I loved just hanging out in the hammock reading my book and watching the peacocks chase the cows!
- Krista Weir, Sri Lanka
Ampersand provided a bespoke and flexible holiday, tailored to my every whim. Their highly professional staff had only one goal which was to arrange an exceptional holiday and some unforgettable experiences in India. I have no hesitation in fully recommending them and they will be the first company I approach in the future - 10/10
- Anonymous, India
Difficult to articulate just how good the service from you and your team really was. We know you will continue to do well and hope we have the chance to seek your assistance again before long.
- Mr & Mrs Manson, North India
I had a very lovely time and was looked after splendidly. My first visit to India could not have been better, save for being longer! But I shall return at some point and I shall look to you to make the arrangements.
- Matthew Nicklin, North India
I would recommend Ampersand without any hesitation!!! The best travel agent that I’ve ever had. Everything – from the individual care and attention in planning the trip, through to the efficiency of the agents on the ground in India – was handled brilliantly. An absolutely first-class service all round!
- Matthew Annable, Rajasthan, India
We had a wonderful holiday - everything was perfect. Thank you for helping us to make a thoughtful plan to enjoy and make most out of our trip. The places we visited, the guides, the transportation and driver, the hotels selected... Everything was great!
- Jaime Benitez, South India
Without question, you put together the best trip I have ever taken. We were shown around like visiting dignitaries, the hotels were fantastic and the itinerary was just right. Everybody I know will hear about how amazing Ampersand is!
- Leslie Siben, India
Everything you did for us whilst we were away was hugely appreciated, and Ampersand has been exemplary in every way. I'll always recommend you!
- Mr Richard Stoughton, Sri Lanka