A Hindustan Calendar: festivals and events in India

India is undoubtedly the globe's largest collection of 'happenings'. From the smallest jungle village to the sprawling cities, the joyful clamour and colour of festivals and events are a daily part of life. Millennia-old ceremonies and contemporary exhibitions jostle together in the most buzzing calendar in the world.

Festivals are perhaps the most eye-opening glimpse into a local culture and discovering one while travelling can often produce unexpectedly special experiences not to mention images to capture. Whether religious, secular or downright bizarre, India has a myriad of festivals that would take a lifetime to explore. We have hand-picked eight of the most special events that promise a lifetime of sighing memories! Festivals in India happen throughout the year but October to March is the time to see this land at its vibrant best. 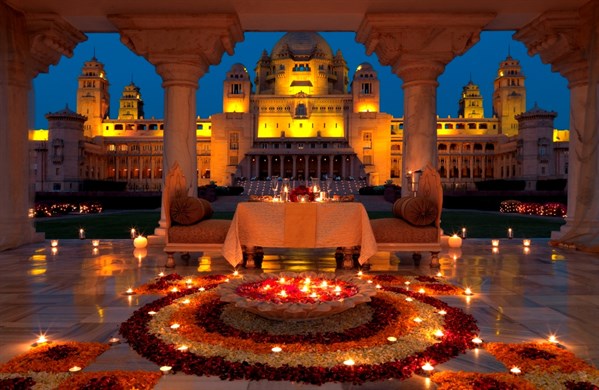 There is no more vivid place to celebrate this festival of lights than the blue desert city of Jodhpur. Houses are adorned with clay lamps, flickering candles, and 'Ashok' leaves. Families perform 'puja' or prayers together, share sweets with friends and neighbours and the city comes alive with a cacophony of firecrackers. The roof terrace of boutique hotel RAAS is an elegant and memorable setting to have a bird’s eye view of proceedings, gasp as the night sky and the mighty silhouette of the Mehranagh Fort is illuminated by a thousand fireworks. The festival is the most treasured in the Hindu calendar and marks the return of god Lord Rama, along with his wife Sita and brother Lakshmana, after a long exile of 14 years.
WHEN: October
STAY: RAAS, Tunwar ji ka Jhalra, Makrana Mohalla, Jodhpur, Rajasthan 342001

Pongal, Tamil Nadu
This Indian equivalent of Thanksgiving is celebrated in the southern state of Tamil Nadu. A 5,000-year-old festival heralded by the end of the wet month of Maargazhi (mid-December to mid-January), the event begins a new Tamil month marking a period of abundance, peace and contentment. Be sure to try the sweetened dish of rice boiled with lentils, cardamom, raisins, Green gram and cashew nuts, ritually consumed on the day and served on a banana leaf.
WHEN: January
STAY: Svatma, No. 4/1116, Blake Hr Sec School Road, Maharnonbu Chavadi, Thanjavur, Tamil Nadu 613001 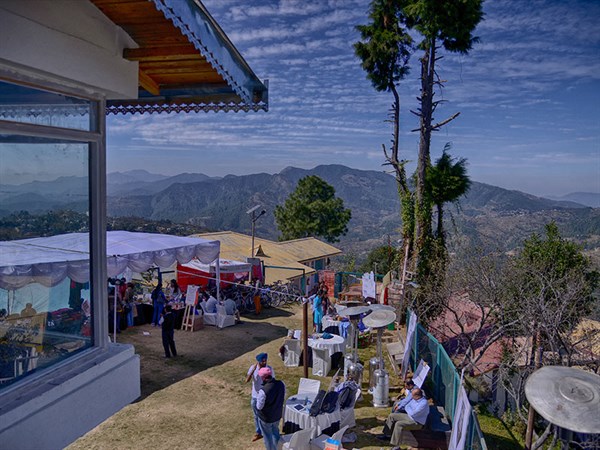 The understated younger sister of Jaipur Literature Festival, head to the Himalayan foothills for the newly launched Kumaon Literary Festival in the scenic state of Uttarakhand. It may lack the glitz of Jaipur but has sophistication and literary kudos in spades and is set in a beautiful mountain village. Founded by lawyer and museum owner, Sumant Batra, KLF is self-described as a 'festival determined to make a difference' and is partnered with several charitable initiatives including United Nations Women. Come here to meet some of India's most influential thinkers and influencers as well as experience village treks, fabulous local food and stargazing sessions.
WHEN: October
STAY: Eco-lodge set in renowned tiger sanctuary: Jim's Jungle Retreat, Corbett National Park, Uttarakhand

Ganesh Charturthi, Mumbai
This 10-day Hindu festival, Ganesh Charturti, also know as Ganapati, celebrates the birthday of the elephant-god, Ganesha and is believed to bring happiness, good luck, and prosperity to all. Go to Mumbai for the throbbing celebrations, where towering idols and vibrant pandals (temporary shrines) line the city. Stay for the last day of the festival were the idols are taken out in a colourful and musical procession and immersed traditionally in water.
WHEN: August
STAY: Taj Mahal Palace, Colaba, Mumbai 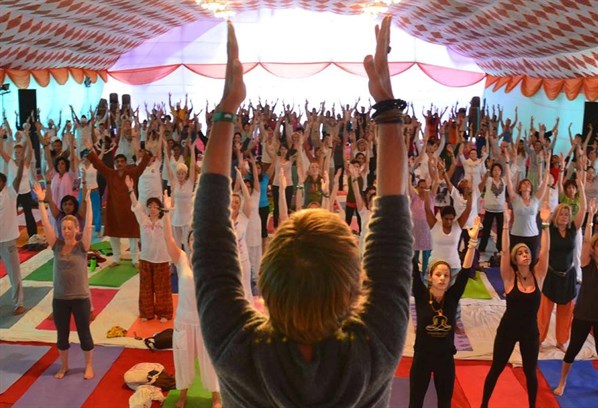 Every March, yogacharyas, teachers, students and seekers descend on the Ganges-side town of Rishikesh for a journey of discovery and exploration of the eight limbs of yoga. With nearly 150 classes, sample every type of yoga you can think of including Ashtanga, Kundalini, Vinyasa and Iyengar plus the more esoteric Raja and Bharat. Also, on offer are sessions in meditation, mudras, Sanskrit chanting, reiki and Indian philosophy.
WHEN: March
STAY: Ananda in the Himalayas, The Palace Estate, Narendra Nagar Tehri - Garhwal, Narendra Nagar, Uttarakhand 249175

Dev Deepavali, Varanasi
Held on the 15th day of Diwali, thousands of pilgrims arrive in the city to commemorate a divine descent to earth. It is a feast for the eyes – watch pilgrims take a solemn dip in the Ganges and listen to the holy Vedic mantras chanted by priests. Hop in a boat in the evening and be rowed down the ghats to get a spectacular view of the Diyas (earthen lamps) decorating the ghats – the Dasaswamedh Ghat is particularly breathtaking.
WEHN: November
STAY: Ganges View, Assi ghat, Varanasi, Uttar Pradesh 221005

India Art Fair, New Delhi
South Asia's leading contemporary art happening takes place in Delhi every February and sets the city abuzz with curators, collectors and glitterati flying in from all over the globe. There are exhibitions for every taste, from video installations to ceramics, photographs and interior design. The acclaimed Speakers Forum is a space to hear prominent gallerists, philanthropists and experts discuss diverse topics around the art world. Delhi is a growing hub of international art and there are trails, private views and openings all over the city to attend.
WHEN: February
STAY: The Lodhi, Lodhi Road, New Delhi 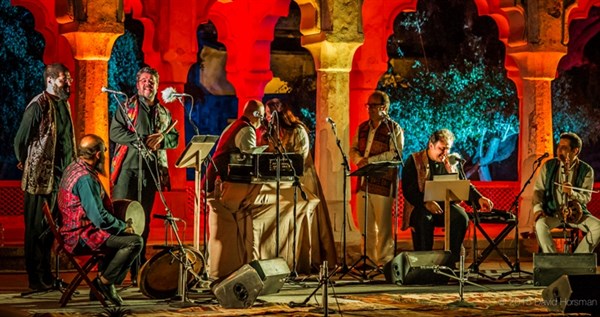 The ancient royal fort of Nagaur is the setting for this intimate festival celebrating the music of Sufi-ism, a mystical branch of Islam. Choose between staying the fort’s ramparts at boutique hotel Ranvas or in a regal tented camp. This is a timeless and soul-enriching experience. Get lost in the whirling bodies of the dancing dervishes, in the beat of the tabla drums and Persian poetry recitals under the starlit desert sky. The location perfectly captures the mingling of history and spirituality.
WHEN: February
STAY: Ranvas, Ahhichatragarh Fort. Gandhi Chowk, Nagaur, Rajasthan

Durga Puja, Kolkata
Commemorating Lord Rama's invocation of the goddess Puja before going to war, Durga Puja is celebrated with a grand fervour in Kolkata attracting millions of pilgrims - this is not an event for the fainthearted! Taking place each September-October and lasting 10 days, Durga Puja sweeps the entire city up in its wake, the powerful goddess, Durga, the embodiment of feminine power, being much revered here. The magnificently dressed idols are processed through the streets on the first day and the festival culminates in the last day with the immersion of the goddess in water - an unforgettable sight. Babu Ghat, near Eden Garden is one of the most popular places to watch. Women initiate the ceremony by anointing the idols and each other with vermillion powder symbolising fertility and marriage.
WHEN: September
STAY: The Oberoi Grand, 15 Jawaharlal Nehru Rd, Kolkata

Ampersand’s preparation, attention to detail and interaction before and during our trip show exactly why good travel agents have a role in today’s internet booking age. They were a delight to deal with!
- Mr David Wallace, North India
Ampersand provided a bespoke and flexible holiday, tailored to my every whim. Their highly professional staff had only one goal which was to arrange an exceptional holiday and some unforgettable experiences in India. I have no hesitation in fully recommending them and they will be the first company I approach in the future - 10/10
- Anonymous, India
I thought the Ampersand team was outstanding. We couldn’t have hoped for anything more.
- Mr Geoffrey Johnson, India
I had a very lovely time and was looked after splendidly. My first visit to India could not have been better, save for being longer! But I shall return at some point and I shall look to you to make the arrangements.
- Matthew Nicklin, North India
So many highlights to choose from! The hotels were amazing but Maya Villa was a highlight… I loved just hanging out in the hammock reading my book and watching the peacocks chase the cows!
- Krista Weir, Sri Lanka
I would recommend Ampersand without any hesitation!!! The best travel agent that I’ve ever had. Everything – from the individual care and attention in planning the trip, through to the efficiency of the agents on the ground in India – was handled brilliantly. An absolutely first-class service all round!
- Matthew Annable, Rajasthan, India
We had a wonderful holiday - everything was perfect. Thank you for helping us to make a thoughtful plan to enjoy and make most out of our trip. The places we visited, the guides, the transportation and driver, the hotels selected... Everything was great!
- Jaime Benitez, South India
Everything you did for us whilst we were away was hugely appreciated, and Ampersand has been exemplary in every way. I'll always recommend you!
- Mr Richard Stoughton, Sri Lanka
Without question, you put together the best trip I have ever taken. We were shown around like visiting dignitaries, the hotels were fantastic and the itinerary was just right. Everybody I know will hear about how amazing Ampersand is!
- Leslie Siben, India
Difficult to articulate just how good the service from you and your team really was. We know you will continue to do well and hope we have the chance to seek your assistance again before long.
- Mr & Mrs Manson, North India