A mini-guide to Bhutan – Land of the Thunder Dragon

The mountain paradise of Bhutan, known as ‘the happiest kingdom on earth’ has always been a frontier land promising a unique adventure to any traveller. Land-locked between the goliaths of India and China, Bhutan is a diminutive treasure box of alpine scenery with pristine landscapes, intriguing architecture and perhaps its greatest asset – the gentle and gracious people. The Bhutanese call their home Druk Yul or "Land of the Thunder Dragon" in their native tongue. Ruled by the Oxford-educated King Jigme Wanghuck and his beautiful wife, Jetsun Pem, the country enjoys an affectionate relationship with its monarchy. The ‘dragon king’ (also known as k5, his father having been k4 before his abdication) is a self-effacing man with touches of eccentricity (his greatest ambition is to find the Yeti), often to be found on a bicycle. 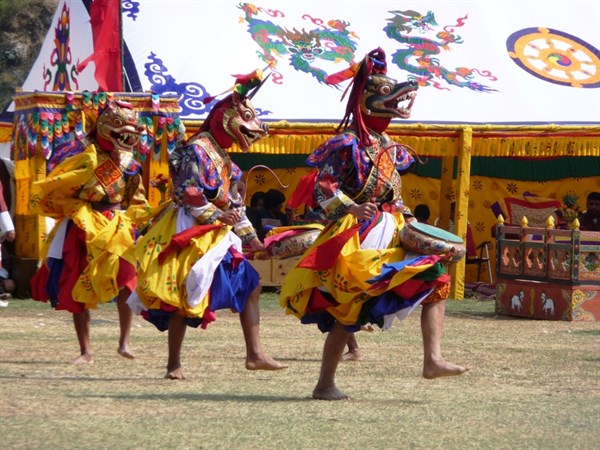 Bhutan, roughly the size of Switzerland, has a complex history and guards its privacy fiercely. Independent travellers are not allowed and, perhaps to discourage mass tourism, a tourist tax is levied on every visitor. These restrictions, which may seem daunting to the novice, in fact, greatly protect the unspoiled nature of Bhutan and those who have made the journey return enthralled. One film producer wrote that ‘If there is any country on Earth that qualifies as Eden, I believe it is Bhutan’. There is something for everyone, be it a memorable bespoke tour, a trekking holiday or a spiritual retreat. Buddhism infuses all areas of life here. There are over 2,000 monasteries scattered like drifts of jewels across the landscape. The country’s most enduring image is perhaps the Taktsang Lhakhang or the Tiger's Nest temple, a sacred pilgrimage site. Perched like an eagle’s nest, an astonishing 3,000m up a cliff face, the temple is an exhilarating and rewarding trek which ranks as a must-do experience. Legend has it that this is where the Guru Rinpoche, who is said to have brought Buddhism to Bhutan, arrived from Tibet, rather jauntily, on the back of a tigress.

The west of Bhutan is dominated by fertile Paro valley which sits placidly underneath the mighty Mount Jhomolhari, the country's highest peak, revered as a divinity. The valley is enticingly bordered by sprawling jungle, home to elephants and tigers. Stay at the charming Gangtey Palace Hotel – once the residence of the Penlop (Governor) of Paro, this 19th-century palace-style building has bags of atmosphere, as well as memorable Bhutanese hot stone baths. Paro is also the setting for one of our favourite hotels anywhere, Como Uma Paro, where you can indulge in one of the many rejuvenating treatments on offer at the Shambhala Spa. 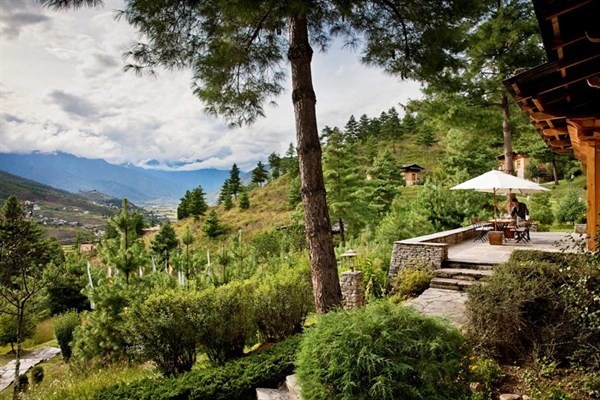 Take time to discover Bhutanese urban life at the tranquil capital, Thimphu. Enjoy the Changangkha temple and the National Museum as well as traditional painting classes and the fascinating Royal Textile Academy where examples of delicate local work can be bought. The weekend market is an assault on the senses, meander amongst fluttering prayer flags, gaily- painted dragons and pink cubes of saffron and camphor, sold to pilgrims to scent holy water. Foodies can acquire bottles of wild honey from the south of the country, roasted barley and even whole legs of yak (complete with hoof). Both native and (loosely translated) international cuisine can be sampled at restaurants such as Zombala 2 (plump for the momos, dumplings filled with pork or cheese, accompanied by local peach wine) or tuck into thin crust pizza at Seasons, the city’s renowned Italian trattoria. Base yourself at Taj Tashi Hotel, a blend of Bhutan’s Dzong architecture and contemporary design. Decorated with classical hand-drawn Buddhist murals, the rooms sing with crisp views of the mountains that rise above the Thimphu Valley. 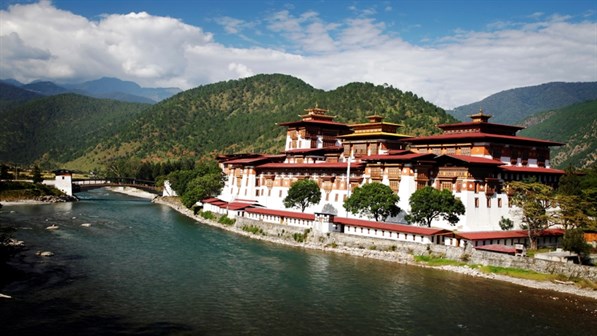 Three hours’ drive from the capital is the Punakha Valley, home to the majestic Punakha Dzong, a 17th-century monastery restored to its former glory by the king and home to a famous wooden phallus, prayed at by female pilgrims seeking to concieve. Temperate climes caress this valley, with its lush rice fields and voluptuous rivers. Drive through carpets of wild flowers, sky blue Primulas and Daphne scenting the air, to Amankora, an idyllic lodge resting in an orange orchard and gazing over the alpine landscape. Wood-panelled interiors, roaring ‘Bukhari’ stoves and a spa create a deeply romantic retreat. The hotel also includes a farmhouse that once belonged to the Queen Mother and a private dinner here is a high note that will linger sweetly.

East of Punakha lies Gangtey, the name commonly given to the Phojikha Valley. It is one of the kingdom’s few glacial valleys, however the area is best known for the rare black-necked crane which migrates from the Tibetan Plateau to escape the brutally cold winters. The locals, and indeed many visitors, celebrate these elegant and shy birds during the black-necked crane festival which is held each November. Stay at the luxury Bhutanese farmhouse, Gangtey Lodge, a charming labour of love which effortlessly blends sumptuous cutting-edge design with a local homely Bhutanese feel.

Bhutan’s moniker is apt, it is indeed an elusive dragon of legend, unwilling to be tamed and yet as irresistible as any mythical creature can be. Come here – this enigmatic land awaits discovery.

For more information or to start planning your tailor-made holiday to Bhutan please contact us:

Everything you did for us whilst we were away was hugely appreciated, and Ampersand has been exemplary in every way. I'll always recommend you!
- Mr Richard Stoughton, Sri Lanka
I had a very lovely time and was looked after splendidly. My first visit to India could not have been better, save for being longer! But I shall return at some point and I shall look to you to make the arrangements.
- Matthew Nicklin, North India
I would recommend Ampersand without any hesitation!!! The best travel agent that I’ve ever had. Everything – from the individual care and attention in planning the trip, through to the efficiency of the agents on the ground in India – was handled brilliantly. An absolutely first-class service all round!
- Matthew Annable, Rajasthan, India
Ampersand provided a bespoke and flexible holiday, tailored to my every whim. Their highly professional staff had only one goal which was to arrange an exceptional holiday and some unforgettable experiences in India. I have no hesitation in fully recommending them and they will be the first company I approach in the future - 10/10
- Anonymous, India
So many highlights to choose from! The hotels were amazing but Maya Villa was a highlight… I loved just hanging out in the hammock reading my book and watching the peacocks chase the cows!
- Krista Weir, Sri Lanka
Without question, you put together the best trip I have ever taken. We were shown around like visiting dignitaries, the hotels were fantastic and the itinerary was just right. Everybody I know will hear about how amazing Ampersand is!
- Leslie Siben, India
Ampersand’s preparation, attention to detail and interaction before and during our trip show exactly why good travel agents have a role in today’s internet booking age. They were a delight to deal with!
- Mr David Wallace, North India
I thought the Ampersand team was outstanding. We couldn’t have hoped for anything more.
- Mr Geoffrey Johnson, India
We had a wonderful holiday - everything was perfect. Thank you for helping us to make a thoughtful plan to enjoy and make most out of our trip. The places we visited, the guides, the transportation and driver, the hotels selected... Everything was great!
- Jaime Benitez, South India
Difficult to articulate just how good the service from you and your team really was. We know you will continue to do well and hope we have the chance to seek your assistance again before long.
- Mr & Mrs Manson, North India