"Despite all of the transformation, much about Vientiane remains the same: the monks sweeping their temple grounds at dusk, the joys of a Beer Lao on the riverfront at sunset, the baguette vendors near the morning market at midnight, the refreshing openness and general goodwill. It is still a wonderful place to live…and a fascinating place to visit."
Brett Dakin, Another Quiet American: Stories of Life in Laos


The fascinating combination of French colonial heritage, Buddhist culture and a relaxed pace of life, makes Laos possibly the most alluring country in South East Asia. Read our mini guide and suggestions to find out why…

It may be a small nation but Laos is packed with charm and culture, enough to satisfy any traveller’s demands.

Tucked into the bow of the Mekong River near the border with Thailand, Vientiane is possibly the most modest and laid back city in South East Asia. This small city is home to a fascinating assortment of Wats, the most important being Pha That Luang, a gilded 45 metre tall Buddhist stupa, which today is considered a national symbol. Wide leafy boulevards dotted with crumbling French mansions sweep through the city, and are reminiscent of its colonial past. An impossibly rich selection of (most pointedly French) cuisine presents itself to any visitor, where you can find freshly baked baguettes sold on street corners, and popular French bistros sit along side traditional Asian pho restaurants. From Buddha Park to Morning Market, this eclectic mix of French culture and Asian custom, is where the city’s charm lies. About 300 km north of Vientiane, Luang Prabang is situated at the confluence of the Mekong and Nam Khan Rivers, and a visit to the ancient former capital is a must for any traveller. The historical town is considered by many to be the heart of Laotian culture, and still remains the core centre for Buddhist learning in Laos. The well preserved old town centre is a UNESCO World Heritage Site and feels more like a village with delightful boutiques and restaurants, it is easily discoverable on foot or by bicycle. From watching the saffron robed monks collect their alms in the morning, exploring the plentiful glistening temples, or just sipping on fresh Laos coffee surrounded by colonial architecture. The quiet benevolence of the city exudes peace and tranquillity, and even the most worldly travellers cannot fail to be charmed here.

Surrounded by dramatic misty mountains and lush green paddy fields, Vang Vieng nestles itself into the banks of the Nam Song River. Once known for its toxic party scene, in 2012 the firm fist of the Laos government made it’s presence known, and the riverside rave bars were closed down. The community is now recuperating and turning itself into the outdoor paradise it should be famous for. Rid of rowdy backpackers, rock climbing, hiking, rafting, caving and kayaking are now on offer and it is perfect for gentle adventure en route to Luang Prabang.

Si Phan Don, meaning 4,000 Islands, is a riverine archipelago in the southern part of Laos, just north of the Cambodian border. This stunning and oft overlooked area is where the Mekong River shatters into a fourteen kilometre wide web of rivulets, islets and sandbanks. It is home to rare flora and fauna, including a species of freshwater dolphin. Acting as a natural barrier, the southern Laos culture has been preserved against foreign influences, including French colonialists and the American war. Even by Laos standards, this tranquil place is yet more laid-back with the pendulum of time slowly swinging; it is the perfect place to end a trip to Laos and travellers have often stayed longer than expected, succumbing to its charms. The mysterious Plain of Jars is the stuff of legend. An impressive megalithic archaeological site, scattered with hundreds of large stone jars, this plateau is one of South East Asia’s most mystifying sights. Just outside the town of Phonsavan, historians today remain uncertain as to where the hundreds of jars (some of which are up to three metres tall and weigh up to six tonnes) came from, how they got there or what they were used for. Of course there has been speculation over the years; fanciful legend claims they were made to brew vast quantities of rice wine in celebration of their victory over cruel overlords. But a more likely justification is that they were burial urns for ancient civilisation. More recently, the area was blanket bombed during the Vietnam war in a futile attempt to dislodge communist group Pathet Lao, who were positioned in a network of caves close to the jars. These craters create a unique undulating plateau which is both spectacular and moving.

Bun Bang Fai (Rocket Festival): 6 - 10 May
Bamboo rockets are launched into the sky in an attempt to kick-start the rainy season and bring water to the rice fields. Celebrations also include music and dance performances. See 2014 film ‘The Rocket’.

Lao National Day: 2 December
Celebrating the 1975 victory of the people over the monarchy in establishing the Lao People’s Democratic Republic in 1975, this national holiday is commemorated with parades, speeches and dancing.

In French-colonial Laos many hotels make use of the existing colonial architecture to provide distinctive and unusual places to stay. Wherever you are in the country, you can expect a high standard of accommodation combined with unrivalled service from friendly Laotian people. Amantaka, Luang Prabang
A combination of colonial and local influences, this graceful hotel has a refined concept of luxury and disarming charm.
*An Ampersand Favourite* 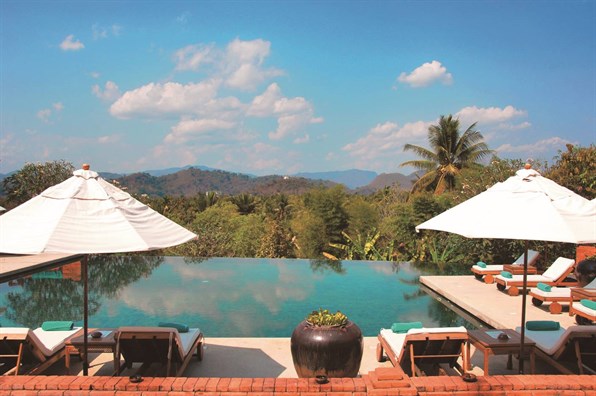 The River Resort, Pakse
A series of lodges nestled on the banks of the Mekong River with unrivalled views of this majestic wonder.
*An Ampersand Favourite* The common school of thought is that October to January are the most popular months to travel, but Laos is actually an all year round destination, despite having two distinct weather seasons. The dry season runs from October to late April, and the wet season from May to late September. During the early months of the wet season (May to July) the rains tend to be short lived with the temperature remaining high, whilst in the latter part of the season, the rainfall becomes heavier and more continuous. In the northern regions, the rainfall is usually lighter and often during the night or early mornings with afternoons remaining relatively clear. Across the country throughout much of the rainy season, the daytime temperatures are an average of 29°C in the lowlands and 23°C in the mountain valleys, and the evening temperatures tend to be much cooler. Of course there are temperature variations, with March to June usually being the hottest times of year, but temperatures throughout the country are significantly affected by altitude. The north, central and eastern regions are at a higher altitude and generally cooler than those in the south, where the lowest in the Mekong River valley, humidity is higher and temperatures can rise to above 35°C between March and April. In the northern regions, Laotians follow a slash-and-burn is an agricultural technique, so much of this area, including Luang Prabang, becomes shrouded in smoke from March until early May, which is worth noting as it can at times be quite uncomfortable.

For more information or to start planning your own luxury holiday to Laos, please contact us: info@ampersandtravel.com / +44 (0)20 7819 9770

I thought the Ampersand team was outstanding. We couldn’t have hoped for anything more.
- Mr Geoffrey Johnson, India
We had a wonderful holiday - everything was perfect. Thank you for helping us to make a thoughtful plan to enjoy and make most out of our trip. The places we visited, the guides, the transportation and driver, the hotels selected... Everything was great!
- Jaime Benitez, South India
I would recommend Ampersand without any hesitation!!! The best travel agent that I’ve ever had. Everything – from the individual care and attention in planning the trip, through to the efficiency of the agents on the ground in India – was handled brilliantly. An absolutely first-class service all round!
- Matthew Annable, Rajasthan, India
Ampersand provided a bespoke and flexible holiday, tailored to my every whim. Their highly professional staff had only one goal which was to arrange an exceptional holiday and some unforgettable experiences in India. I have no hesitation in fully recommending them and they will be the first company I approach in the future - 10/10
- Anonymous, India
Everything you did for us whilst we were away was hugely appreciated, and Ampersand has been exemplary in every way. I'll always recommend you!
- Mr Richard Stoughton, Sri Lanka
Difficult to articulate just how good the service from you and your team really was. We know you will continue to do well and hope we have the chance to seek your assistance again before long.
- Mr & Mrs Manson, North India
Without question, you put together the best trip I have ever taken. We were shown around like visiting dignitaries, the hotels were fantastic and the itinerary was just right. Everybody I know will hear about how amazing Ampersand is!
- Leslie Siben, India
I had a very lovely time and was looked after splendidly. My first visit to India could not have been better, save for being longer! But I shall return at some point and I shall look to you to make the arrangements.
- Matthew Nicklin, North India
So many highlights to choose from! The hotels were amazing but Maya Villa was a highlight… I loved just hanging out in the hammock reading my book and watching the peacocks chase the cows!
- Krista Weir, Sri Lanka
Ampersand’s preparation, attention to detail and interaction before and during our trip show exactly why good travel agents have a role in today’s internet booking age. They were a delight to deal with!
- Mr David Wallace, North India