March is an important month for women’s rights around the world - not only is it Women’s History Month but it is also International Women’s Day on Wednesday 8th March.

At Ampersand, celebrating local people who make each destination unique is at the very core of what we do, and so this month we wanted to take the opportunity to praise and pay tribute to some of the wonderful women from around the world who have inspired and impacted their local community, and the world as a whole.

It certainly wasn’t easy to whittle our list down to just ten incredible women, but we searched the entire globe and looked back over the course of history, to select some of the most inspirational women of all time from around the world. Our celebratory illustrations below will tell you a little bit about these magnificent females who have inspired, educated and astonished us over the years with their strength, bravery, talent and intelligence. 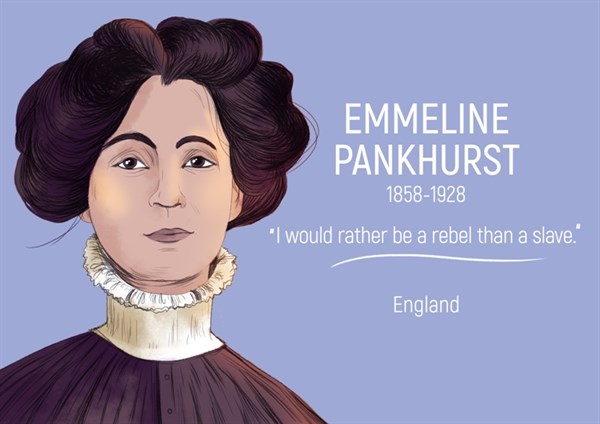 Emmeline Pankhurst is credited as being the very lady we have to thank every time we cast our vote at any political election. Less than 100 years ago women did not have the right to vote in the UK, and they weren’t given equal voting rights to men until 1928.

The British Suffragette Movement, headed by Emmeline Pankhurst, is in many ways responsible for gaining women the right to vote. Their tactics and methods of campaign were notoriously radical, and included protests from hunger strikes to arson.

Emmeline was always a steadfast supporter of women’s rights, first setting up the Women’s Franchise League in 1889 before helping to set up the Women’s Social and Political Union (WSPU) – which was the first organisation to be referred to as ‘suffragettes’ – in 1903.

In 1918 women over the age of 30 were given the right to vote. In 1928 women were given equal voting rights to men, just weeks after Emmeline Pankhurst died. 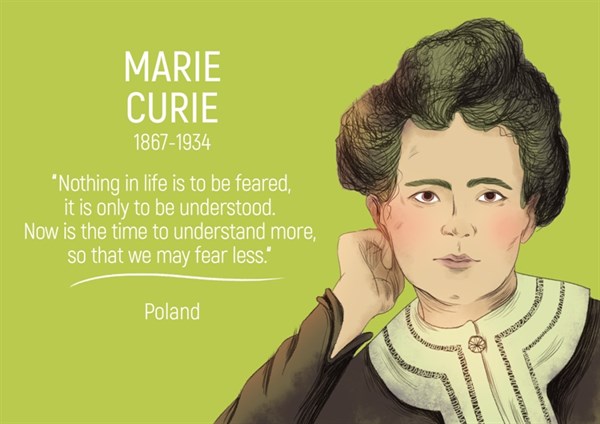 Marie Curie was the first ever woman to win a Noble Prize, and the only woman to ever win twice. The iconic physicist and chemist is most renowned for her work developing the theory of radioactivity – a major breakthrough in medical development and research.

Marie Curie is rightly admired for her scientific brain and achievements, but what makes her even more incredible is that she defied all expectations and gender roles of the time.

During Marie Curie’s lifetime it was very unusual for women to have careers, let alone a career in science, an industry which to this day remains male dominated.

Marie Curie is an inspiration for all women in the fields of science, technology, engineering and maths, proving that a woman can compete to be one of the greatest science minds of all time. 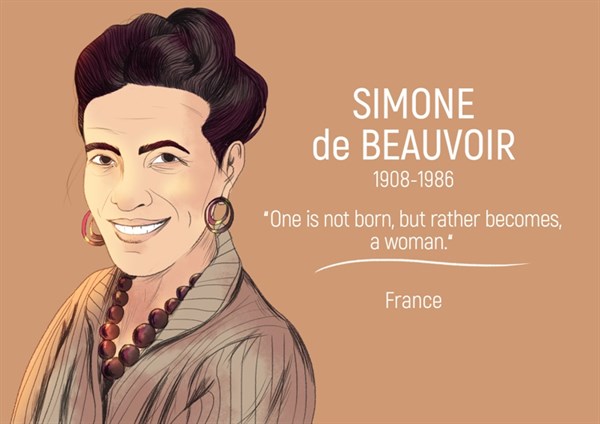 Simone de Beauvoir is widely credited as being the inspiration for second-wave feminism, a period of feminism which occurred through the 1960s-1980s, and tackled issues such as women’s sexuality, working rights and family lifestyle.

The writer’s most-famous work ‘The Second Sex’ is a detailed analysis of women’s oppression, in which she explained “why a woman's situation, still, even today, prevents her from exploring the world's basic problems.”

Simone de Beauvoir was a feminist and philosopher, who did not abide by the status quo for women at the time. She was known for her musings on what it meant to be a woman, and her questions have had a significant impact on feminist theory and movement over the course of history. ‘The Second Sex’ remains a key text in the study of feminism today. 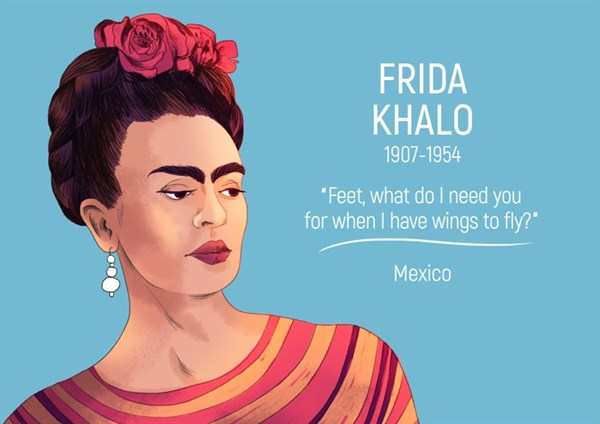 Frida Kahlo was an iconic artist who is infamous for her self-portraits, a series of paintings which challenged the notion of female beauty, and tackled issues including mental and physical health.

The artist expressed much of her own suffering through her work; at the age of six she contracted polio, and in her teens she was involved in a serious car accident which caused lifelong injuries to her leg and pelvis, and left her infertile.

Frida’s work covered taboo and controversial topics, and she remains an inspiration and hot topic of discussion within the art world today. 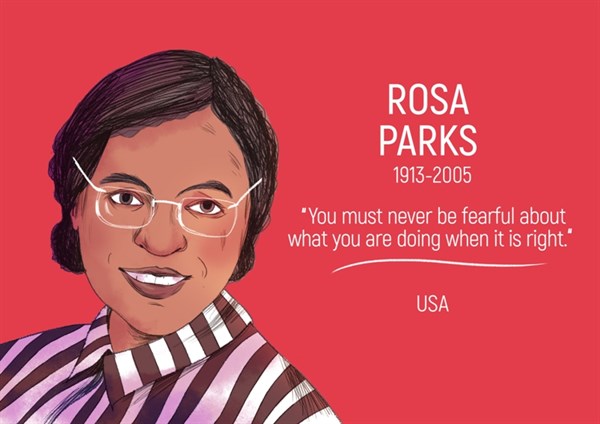 Rosa Parks came to be known for her refusal to give up her seat on the bus for a white man, an incident which caused outcry in 1955 segregated Alabama.

During this time, buses were divided into ‘black’ and ‘white’ sections. When the ‘white section’ had filled up Rosa was instructed to give up her seat for a white man, but she refused. The incident sparked the Montgomery Bus Boycott which lasted 381 days.

Rosa Parks also went on to be heralded as “the first lady of civil rights” and “the mother of the freedom movement”. She became an iconic player in civil rights activism working with notable leaders including Edgar Nixon and Martin Luther King Jr, and has received many honours for her work including NACCP’s 1979 Spingarn Medal, the Presidential Medal of Freedom and the Congressional Gold Medal. 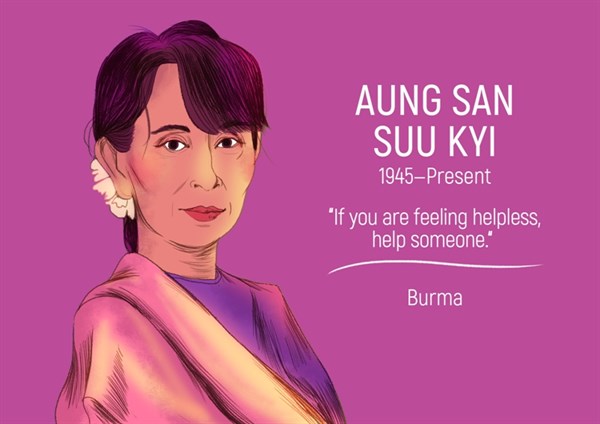 It has not been an easy journey for Aung San Suu Kyi to gain a position of power in Myanmar, a country which has a history of dictatorial government. Aung San Suu Kyi has become renowned globally for her peaceful fight to bring democracy to Burma and her human rights activism.

Aung San Suu Kyi first won the national elections in 1990, but a corrupt Government refused to hand over power and kept Aung San as a political prisoner for two decades. A worldwide cry to release her saw her freedom in 2010.

Since her release in 2010 she has continued to fight for democracy in Myanmar and in 2012 her party, the National League for Democracy, won 43 seats in the national by-elections. In 2015 she led her party to a majority win in Myanmar’s first openly contested election in 25 years. 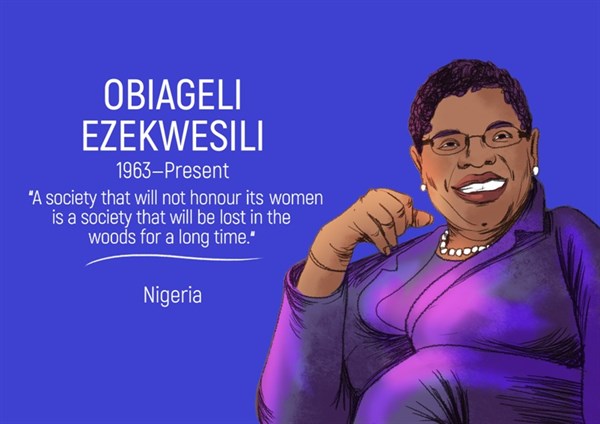 Obiageli Ezekwesili is best known for the #BringBackOurGirls campaign for which the whole world showed its support in 2014, when 276 girls were abducted from Chibok by Boko Haram.

Obiageli Ezekwesili was not impressed by the local Government’s handling of the incident, and so decided to globalise the search for the missing girls by taking the issue to social media. Her campaign gained the support of powerful celebrities and politicians across the globe, and brought worldwide attention to the situation.

Obiageli Ezekwesili was already a prominent political voice in Nigeria prior to the campaign, as co-founder of Transparency International, former Federal Minister of Education and Vice-President of the World Bank’s Africa division.

Around 20 of the missing girls have since been found, but Obiageli Ezekwesili continues her work on the campaign and is a key spokesperson for matters of women’s and human rights. 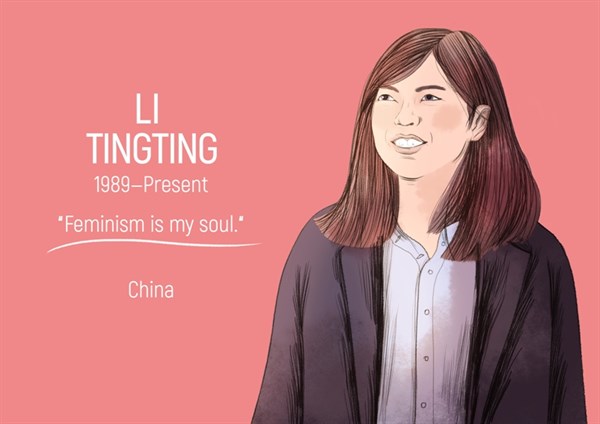 Li Tingting is one of the women on our list who you may not have heard of before, but she has been campaigning for gender equality and sexuality in her home country of China for several years now.

As a student in 2012 Li protested against domestic violence, by walking down a shopping street in Beijing dressed in a blood-splattered wedding dresses. Her activities caught the attention of the local police, and Li and four other protesters (known as ‘the feminist five’) were arrested, ahead of their plans to protest against sexual harassment on public transport.

Li was released 37 days later after a global outcry. She is openly gay and also campaigns for LGBTQ+ rights. Same sex marriage is currently illegal in China however that didn’t stop Li from holding a wedding ceremony for her and her partner. 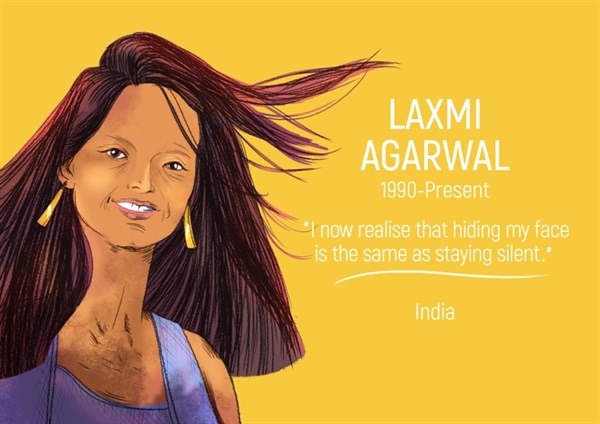 Another woman on our list whose story you may not know. Laxmi Agarwal is the brave survivor of an acid attack, who used her own experience to significantly change how acid attacks are handled in India.

Laxmi was attacked aged just 15 after turning down the advances of an older man. Acid attacks in India are crimes predominantly targeted towards women, and are intended to shame the victims. Laxmi refused to let the attack humiliate her, and instead set up a social media campaign called ‘Stop Acid Attacks’. She started a petition to regulate acid sales, which gained 27,000 signatures and was successful in regulating the sale of acid in India, as well as making acid attacks easier to pursue in court.

Laxmi is now the director of Chhanv Foundation which is dedicated to helping the survivors of acid attacks in India. In 2014 she received an International Women of Courage award from Michelle Obama. 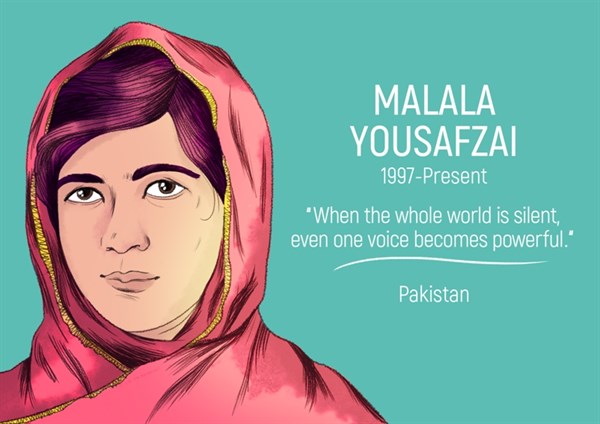 The youngest woman on our list, Malala Yousafzai is an inspiration who has touched the hearts of people worldwide, including many prominent celebrities.

As an activist for female rights and education, Malala is the youngest person ever to win a Nobel Prize. She has also set up her own charity, co-authored a book and inspired an Oscar-nominated documentary.

Malala first begun telling her story about life under the Taliban occupancy on a blog for BBC Urdu, which she wrote under a pseudonym. Malala then became the subject of a New York Times documentary and began giving interviews about her experiences.

In 2012 Malala survived an assassination attack by the Taliban and she has since moved to the UK where she has picked up her education and continues to fight for girls to have the right to learn.

Which of these inspirational ten ladies is your favourite, or is there another iconic woman who has inspired you? Share your most inspirational woman with us on our Twitter and Facebook.

Ampersand provided a bespoke and flexible holiday, tailored to my every whim. Their highly professional staff had only one goal which was to arrange an exceptional holiday and some unforgettable experiences in India. I have no hesitation in fully recommending them and they will be the first company I approach in the future - 10/10
- Anonymous, India
Everything you did for us whilst we were away was hugely appreciated, and Ampersand has been exemplary in every way. I'll always recommend you!
- Mr Richard Stoughton, Sri Lanka
We had a wonderful holiday - everything was perfect. Thank you for helping us to make a thoughtful plan to enjoy and make most out of our trip. The places we visited, the guides, the transportation and driver, the hotels selected... Everything was great!
- Jaime Benitez, South India
I had a very lovely time and was looked after splendidly. My first visit to India could not have been better, save for being longer! But I shall return at some point and I shall look to you to make the arrangements.
- Matthew Nicklin, North India
Without question, you put together the best trip I have ever taken. We were shown around like visiting dignitaries, the hotels were fantastic and the itinerary was just right. Everybody I know will hear about how amazing Ampersand is!
- Leslie Siben, India
Ampersand’s preparation, attention to detail and interaction before and during our trip show exactly why good travel agents have a role in today’s internet booking age. They were a delight to deal with!
- Mr David Wallace, North India
I thought the Ampersand team was outstanding. We couldn’t have hoped for anything more.
- Mr Geoffrey Johnson, India
Difficult to articulate just how good the service from you and your team really was. We know you will continue to do well and hope we have the chance to seek your assistance again before long.
- Mr & Mrs Manson, North India
I would recommend Ampersand without any hesitation!!! The best travel agent that I’ve ever had. Everything – from the individual care and attention in planning the trip, through to the efficiency of the agents on the ground in India – was handled brilliantly. An absolutely first-class service all round!
- Matthew Annable, Rajasthan, India
So many highlights to choose from! The hotels were amazing but Maya Villa was a highlight… I loved just hanging out in the hammock reading my book and watching the peacocks chase the cows!
- Krista Weir, Sri Lanka