A mini-guide to Hampi, an ancient world of Rocks & Ruins

A near-mythical landscape of mysterious boulders, ancient temples and remnants of a 14th century lost city, Hampi is like nowhere else in India. Sometimes referred to as the subcontinent's own Machu Picchu, this former capital of the Vijayanagara Empire - split between two different ‘centres’; the Royal and Sacred - is a must for both history and adventure lovers. A UNESCO World Heritage Site, Hampi will cast a spell on you that will linger long after leaving. Explore the astonishing rock-strewn vistas and be immersed in a magical atmosphere humming with the romance of lost glory and natural splendour.

The Bellary district of Karnataka consists of the remains of this sprawling scenic ruined city, containing a multitude of temples, monuments, avenues, statues and palaces, all set to a backdrop of running rivers, lush sugarcane fields, swaying palm trees and the famous boulder-strewn landscapes. To do Hampi justice you really need two full days, especially when it is a 5-hour drive from Bangalore or any major city. 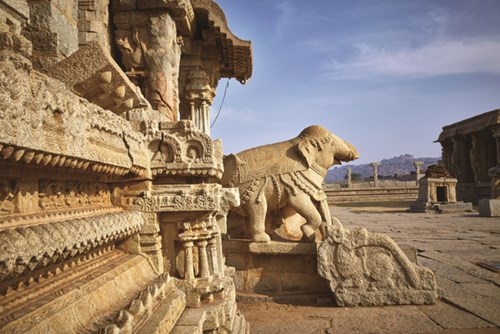 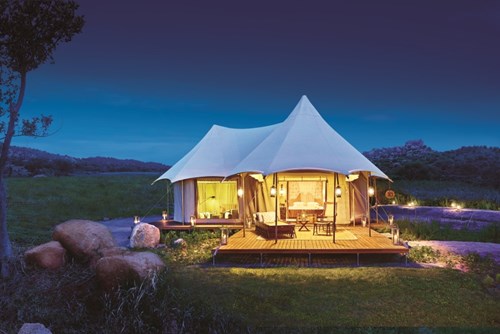 India’s first mobile luxury camp – The Ultimate Travelling Camp - introduced Kishkinda Camp to their portfolio in 2013. Nine colonial style tents are scattered throughout an idyllic site, featuring four poster beds, leather bound trunks and teak bathrooms. This is camping on an Out of Africa scale. A personal butler is on hand to provide the seamless, exquisite touches that The Ultimate Travelling Camp has become known for. The menus are personally chosen by the chef from his own family recipes and highlights local cuisine using the seasonal ingredients. We love the moonlit cocktails and dining which allow fellow guests to compare notes and bond over the once-in-a-lifetime experience that Kishkinda Camp effortlessly provides. Handpicked specialists escort visitors to experience all the wonders of Hampi in true style. Our favourites, outside of the main ruins, include the Badami cave temples, birding on the River Tungabhadra and visiting the banjara (gypsy) women of nearby Sandur to explore their unique folk crafts. 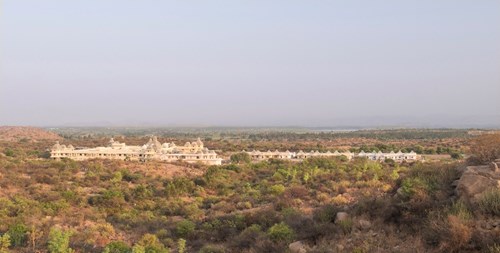 Four kilometres from the ancient temple town, the astonishing and regal edifice of Evolve Back's Kamalapura Palace rises like a mirage out of its landscaped surroundings. Modelled on the region's Dravidian architecture with Indo-Islamic flourishes, the palace is newly built but inspired by Hampi's royal past. The lofty interiors are both relaxed and stately, plump for a villa with its own water garden and blissful bathrooms. Tranquillity is the order of the day at Kamalapura Palace, complemented by the sublime spa treatments and, one of our 'barefoot luxury' experiences, a chance to explore the nearby lake and villages on an electric bike. Another unique touch are the in-house historians who bring the region's rich history to life each evening. Hampi has long deserved accommodation to match its glorious offerings and these fabulous launches are great news.

Lovers of architecture and legend will adore the 15th century Vittalla Temple complex, an extravagant example of South Indian religious devotion. Said to have been built as a home for Lord Vishnu who rejected it as being too grand, the temple houses two fascinating gems in its complex. The 'musical' stone pillars, 56 in all, emit various notes when tapped, a phenomenon that has baffled visitors for centuries. The British cut two in half to try and decipher the mystery, they are still to be seen today. The other treasure is the ornately-carved stone chariot, one of three to be found, the others being in Konark, Odissa, and Mahabalipuram (in Tamil Nadu). Local folklore has it that the world will come to an end if the chariot is ever moved from its sacred spot. 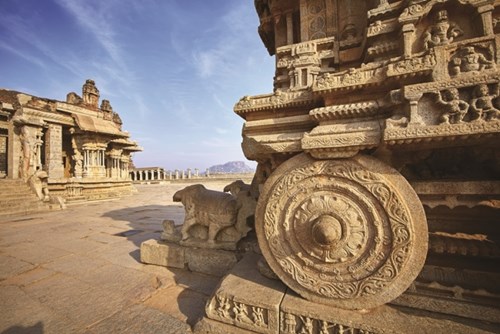 The towering Virupaksha Temple is still very much alive and populated by pilgrims, priests and monkeys as well as a resident temple elephant, Lakshmi. Dating from around the 7th- century, this magnificent sight survived the brutal Muslim pillage of Hampi in 1565 and thrives as the beating heart of the town.

Echoes of royal life are to be found at the Queen's Bath and Zenanna enclosure, once only seen by eunuchs and the king. Take in the arching elephant stables, in time past used by the British to store archaeological remains, and the well-preserved Lotus Mahal.

Sunrise or sunset is an enchanting time to visit the hilltop Monkey Temple, four kilometres from Hampi and said to the birthplace of Lord Hanuman, the monkey god. Another temple worth seeking out is the Mustard Seed Ganesh Temple with its awesome 8 ft monolithic statue of the elephant god, carved out of a single piece of rock. 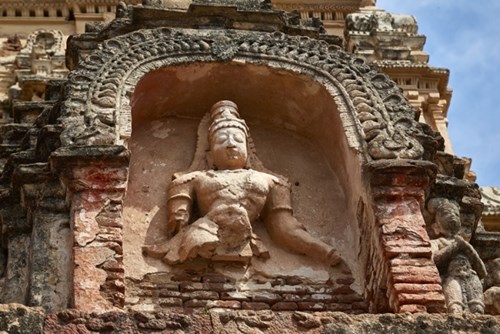 There has been no better time to experience the soulful atmosphere of this unforgettable corner of Hindu South India.

For more information or to start planning your tailor-made holiday to South India, please get in touch:

I thought the Ampersand team was outstanding. We couldn’t have hoped for anything more.
- Mr Geoffrey Johnson, India
So many highlights to choose from! The hotels were amazing but Maya Villa was a highlight… I loved just hanging out in the hammock reading my book and watching the peacocks chase the cows!
- Krista Weir, Sri Lanka
I had a very lovely time and was looked after splendidly. My first visit to India could not have been better, save for being longer! But I shall return at some point and I shall look to you to make the arrangements.
- Matthew Nicklin, North India
Ampersand provided a bespoke and flexible holiday, tailored to my every whim. Their highly professional staff had only one goal which was to arrange an exceptional holiday and some unforgettable experiences in India. I have no hesitation in fully recommending them and they will be the first company I approach in the future - 10/10
- Anonymous, India
We had a wonderful holiday - everything was perfect. Thank you for helping us to make a thoughtful plan to enjoy and make most out of our trip. The places we visited, the guides, the transportation and driver, the hotels selected... Everything was great!
- Jaime Benitez, South India
Everything you did for us whilst we were away was hugely appreciated, and Ampersand has been exemplary in every way. I'll always recommend you!
- Mr Richard Stoughton, Sri Lanka
Difficult to articulate just how good the service from you and your team really was. We know you will continue to do well and hope we have the chance to seek your assistance again before long.
- Mr & Mrs Manson, North India
Ampersand’s preparation, attention to detail and interaction before and during our trip show exactly why good travel agents have a role in today’s internet booking age. They were a delight to deal with!
- Mr David Wallace, North India
Without question, you put together the best trip I have ever taken. We were shown around like visiting dignitaries, the hotels were fantastic and the itinerary was just right. Everybody I know will hear about how amazing Ampersand is!
- Leslie Siben, India
I would recommend Ampersand without any hesitation!!! The best travel agent that I’ve ever had. Everything – from the individual care and attention in planning the trip, through to the efficiency of the agents on the ground in India – was handled brilliantly. An absolutely first-class service all round!
- Matthew Annable, Rajasthan, India