A Visionary Prince: A colourful life of the Maharajah of Kapurthala

Of all the royal families of the East, the ruling princes of India dazzled the world with their astonishing legacies of near-mythical wealth and extravagance. From family trees stretching back to the sun and moon, and jewellery vaults with enough pearls 'to pave Piccadilly', the Maharajas were figures of legend in their own lifetimes. Descendants of warrior chiefs, saints and emperors, the rulers were in turn defiant and indulgent of foreign rule, often intermarrying and, in the case of the British Raj, becoming fervent anglophiles. The Sikh Maharaja of Kapurthala, Jagatjit Singh, was a close friend of Queen Victoria and maintained friendships with several generations of the British royal family. He entertained them at his magnificent rose-pink palace modelled on Versailles and was a trusted confidant.

The mighty northern kingdom of Kapurthala in the heart of the fertile Punjab was subject to the Maharaja's ancestors, who claimed descent from the deity Krishna via Raja Gaj who lost his life fighting the Roman army in present-day Afghanistan. By the 19th century the dynasty was established in the Punjab and Jagatjit Singh ascended the throne to great fanfare in 1877.  A true renaissance ruler, Singh spoke exquisite French and set about transforming his capital into the 'Paris of the East'. Boulevards lined with flowers, palaces housing the elegant queens, A salmon-hued Moorish mosque modelled on the Kutubiyya mosque for his Muslim subjects, Singh's creations were hailed the world over. He married six times including the Spanish dancer, Anita Delgado and a Czech countess.

His grandson, HH Brigadier Maharaja Sukhjit Singh, who still resides in Kapurthala, has recently collaborated on a fascinating biography of the illustrious grandfather he remembers well with historian and author, Cynthia Meera Frederick. The sumptuous book which will be published later this year will be filled with previously unseen material and photographs of the man called 'king of the world'. Here the duo talks to Ampersand Travel about the project. 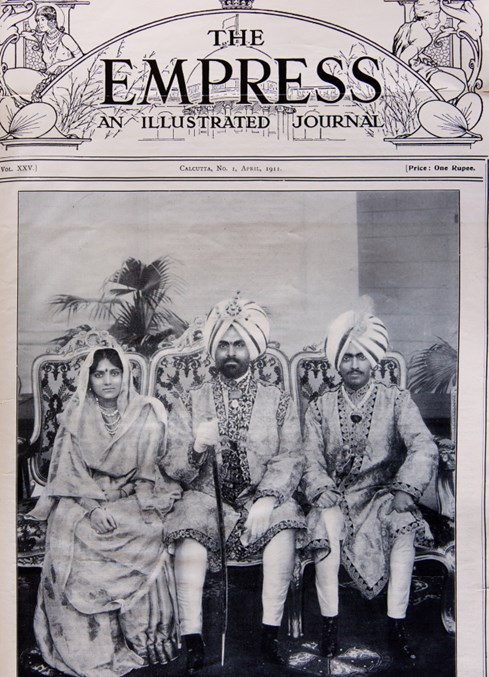 1). Maharaja Jagatjit Singh was a towering figure among the Maharajas of his time, a close friend of Queen Victoria, an ardent Francophile, builder and jewellery collector on a grand scale. Is the book an exhaustive biography or are you concentrating on one particular facet of this fascinating life?

CMF: The idea to fully document the extraordinary life of HH Jagatjit Singh has been on the horizon for several years. The Brigadier had shared so many fascinating stories of his grandfather with me and the Kapurthala archives are such a rich historic resource of his life and times. Initially it was considered to pen a very lengthy biopic. Given his abundant life this would easily have exceeded 500 pages and so rather than a complete study we have selected the most colourful aspects on his life and realm such his extensive travels, architectural legacy and sartorial splendour along with family life and his relationship with eminent figures of the time. These are presented in small accessible vignettes. A further standalone publication is on the cards for the future as there is simply so much to cover!

2). Were there any anecdotes uncovered in the archives that illustrate the Maharaja's character?

HH: Any time a family member or staff member was called into the Maharaja’s office and was immediately greeted in French with a perfunctory 'asseyez vous’ (sit down) that was a sure sign one was going to get a stern lecture from him!  He maintained very high personal standards and expected others to do likewise!

The Maharaja had intriguing relationships with his Viceroys. It is highly amusing to learn that when in the summer capital of the Raj, Simla, in 1891, the young Raja (as he was styled prior to 1911) took up singing lessons. Feeling confident of his new found vocal talents, along with his friend the Maharaja of Dholpur, the princely duo would sing in French and Italian, once even performing at the Town Hall, 'much to the curiosity and astonishment of the Viceroy and other officials'.  We can only imagine how frowned upon this was! Finding Simla too restrictive, he decamped for Mussoorie the very next season and this remained his summer retreat for almost half a century where he built a grand chateau. In general, he held his Viceroys with great affection and esteem. Some were like paternal figures and regarded as dear friends. There was one exception however which we reveal in the book. 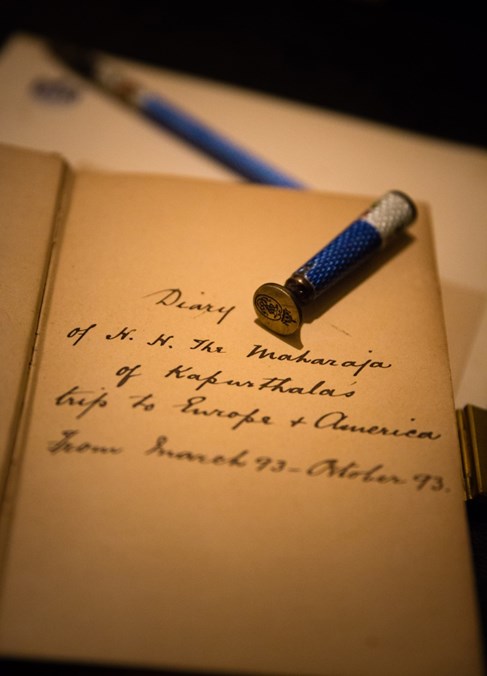 3). What would life at Jagatjit Palace have been like in its golden age? Did the British royal family have occasion to visit?

CMF: As many Indian princes of the day, the Maharaja was a magnificent host. To be his guest was to be enveloped in 'luxe, calme et volupté'. He entertained eminent personalities including the short-lived HRH Duke of Clarence, Grand Duke Boris of Russia, the interior decorator du jour Elsie de Wolfe, jeweller Jacques Cartier as well as viceroys and other luminaries. However, he described the visit of the Prince of Wales to Kapurthala in 1922 (the future Duke of Windsor) as one of the greatest honours of his long life. He personally oversaw all details such as menus, sleeping arrangements and decoration so that each party, however lavish, always retained his own personal touch.

HH: My young life at Jagatjit Palace was magical. The palace was run to perfection, but it is not just the beauty and splendour. There was a sense of pride, devotion and personal accountability that was a hallmark of every single member of the household. We, the royal family, knew each of the staff and their families and there was an unshakable bond of trust and loyalty, It was the graciousness of this world that I lament the passing of – now lost to the portals of history. 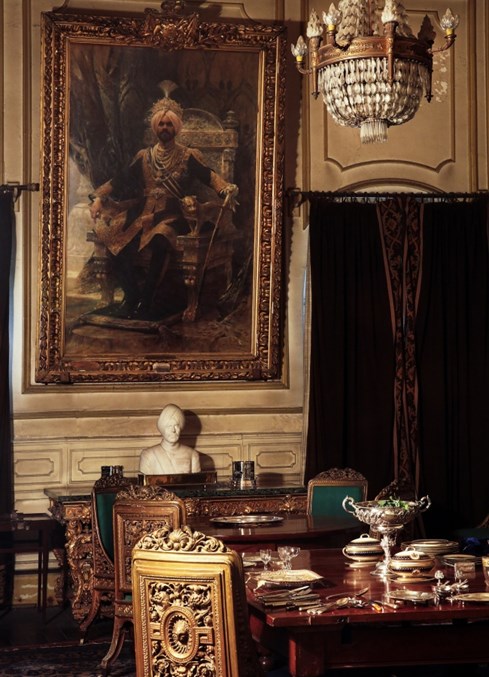 4). The Maharaja's vision for the city of Kapurthala was to create a 'Paris of the East' and many remnants remain of his splendid plans. Which creations apart from the Jagatjit Palace serves as reminders of this visionary prince?

CMF: Aside from the Jagatjit Palace, The Maharaja was so proud of the Moorish Mosque, inaugurated in 1930 for his Muslim subjects – which in pre-partition Kapurthala made up 60 percent of the population. He was inspired to build this in the North African style “Maghrebi” as opposed to the traditional Indo-Islamic style after visiting Marrakech in 1922. This reflects his own unique stamp in Kapurthala’s architectural landmarks and stands as testament to his devotion to his people. After Partition, the mosque fell into disuse and neglect but happily it has recently been restored.

HH: In addition, the Kapurthala War Memorial was one of his initiatives and the first of its kind built by a ruling Prince. This was dedicated in 1927 by his dear friend Field Marshal Sir William Birdwood and this pays homage to the fallen Kapurthala soldiers who served during the Great War.

5). What do you feel is Maharaja Jagatjit's legacy to both Kapurthala and Indian heritage?

CMF: His foresight to allow for gradual agricultural and industrial development is a lasting contribution to the region's economic health which endures today. Many of the industries which he helped set up are still operational including sugar/rice mills and distilleries. During his travels he constantly visited factories and industries gleaning practices in modern technology to import into his own state.

HH: The material culture and opulence of the Indian princes with their fabulous palaces, grand ceremonies and amazing jewels continues to fascinate the world, but we must also remember the fact that many rulers were competent, capable and devoted rulers who were committed to their subjects. We have tried to show in the book how my grandfather was an enlightened and progressive ruler. He also personified the ancient dharma of kingship as the 'Mai Baap' the universal father-mother figure who was the protector of the people. 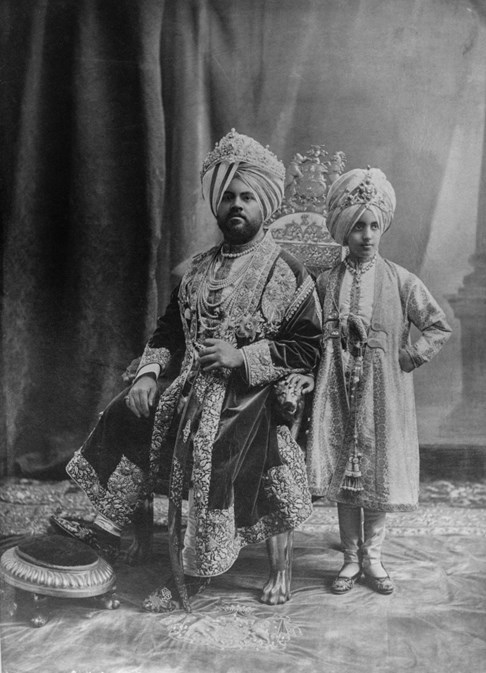 The life of the Maharaja of Kapurthala, published by Roli Books September 2018 by HH Brigadier Sukhjit Singh and Cynthia Meera Frederick. Photographs by Karam Puri.

For more information or to start planning your tailor-made holiday to North India, please get in touch:

Without question, you put together the best trip I have ever taken. We were shown around like visiting dignitaries, the hotels were fantastic and the itinerary was just right. Everybody I know will hear about how amazing Ampersand is!
- Leslie Siben, India
I had a very lovely time and was looked after splendidly. My first visit to India could not have been better, save for being longer! But I shall return at some point and I shall look to you to make the arrangements.
- Matthew Nicklin, North India
So many highlights to choose from! The hotels were amazing but Maya Villa was a highlight… I loved just hanging out in the hammock reading my book and watching the peacocks chase the cows!
- Krista Weir, Sri Lanka
I thought the Ampersand team was outstanding. We couldn’t have hoped for anything more.
- Mr Geoffrey Johnson, India
Everything you did for us whilst we were away was hugely appreciated, and Ampersand has been exemplary in every way. I'll always recommend you!
- Mr Richard Stoughton, Sri Lanka
We had a wonderful holiday - everything was perfect. Thank you for helping us to make a thoughtful plan to enjoy and make most out of our trip. The places we visited, the guides, the transportation and driver, the hotels selected... Everything was great!
- Jaime Benitez, South India
Ampersand’s preparation, attention to detail and interaction before and during our trip show exactly why good travel agents have a role in today’s internet booking age. They were a delight to deal with!
- Mr David Wallace, North India
I would recommend Ampersand without any hesitation!!! The best travel agent that I’ve ever had. Everything – from the individual care and attention in planning the trip, through to the efficiency of the agents on the ground in India – was handled brilliantly. An absolutely first-class service all round!
- Matthew Annable, Rajasthan, India
Ampersand provided a bespoke and flexible holiday, tailored to my every whim. Their highly professional staff had only one goal which was to arrange an exceptional holiday and some unforgettable experiences in India. I have no hesitation in fully recommending them and they will be the first company I approach in the future - 10/10
- Anonymous, India
Difficult to articulate just how good the service from you and your team really was. We know you will continue to do well and hope we have the chance to seek your assistance again before long.
- Mr & Mrs Manson, North India