Mayfair’s Dover Street welcomed the launch of artisanal luxury brand, Varana a year ago and the brand has quickly gained an international coterie of devotees. The three-floor boutique showcases a heart-stoppingly beautiful collection of garments and accessories created in South India for a refined global audience. Each collection is created around a theme that highlights the uniqueness of the subcontinent and is a considered masterpiece of style and artistry. We caught up with Sujata Ray-Keshavan, Founder and Creative Director, who divides her time between Bangalore and London, to hear more about the exciting and new approach Varana has taken to Indian design...

1). Where did the inspiration for founding Varana come from?

The idea behind Varana took form when I was on the river Ganges at Varanasi, one of the world’s oldest cities and widely regarded as the soul of India. It was Diwali night and as the sun set, there were hundreds of little diyas floating on the surface of the water. It was magical. The rivers Varuna and the Asi converge at Varanasi. Derived from Sanskrit, the word Varana means a river, a blessing, a benediction, a reward.

I knew that night that I wanted to work on this new idea, and that the brand would be called Varana. Even the logo evokes the river where the idea was born. For many years before that boat ride, I had been thinking about the fact that India has so much to offer the world in terms of its extraordinary textile and craft heritage. This is not just history but a living tradition… we have the largest number of living artisans in the world and many have total mastery of their craft.

I felt that what was missing was a approach to design to make our products globally relevant. The vision of Varana was to create a brand that re-interpreted our heritage through a modern lens. Ravi Prasad and I launched a year ago with a flagship store in London’s Mayfair. We felt it was important to have a physical space where people could touch and feel the products, to see the quality for themselves. 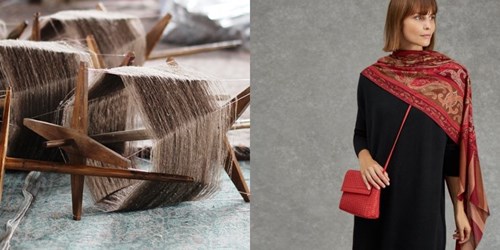 2). What was your background before Varana and how has it influenced you?

I trained in graphic design in Ahmedabad and then at Yale University. I returned to India and founded a design firm called Ray+Keshavan which came to be widely regarded as India’s most influential design company. We helped to create many of India’s leading brands across sectors opening them to new markets. After 25 years as the creative head, I sold the firm to WPP (the media conglomerate headed by Martin Sorrell) and exited the business in 2015, ready for my next adventure!

Textiles have fascinated me since youth. There is a vast and deep Indian tradition of weaving and printing of fabrics that goes back thousands of years. For various reasons, this extraordinary cultural heritage has, by and large, stayed within the South Asian region but now it is opening up.

3). How would you describe Varana’s ethos and aesthetic?

Varana celebrates history, culture and craftsmanship. We create beautiful products using the best natural fibres with an emphasis on the hand-made. We weave and print bespoke fabrics working with master craftspeople using ancient techniques that have been handed down from father to son and mother to daughter.

An ethical brand, Varana sources responsibly, promoting dignity and sustainability within its eco-system. At our heart are the gifted artisans we work with. By reinterpreting the vocabulary of traditional craft through contemporary design, we hope to create new markets and patronage for the makers, giving them a livelihood and fostering pride in their knowledge and skills. Varana caters for a growing set of discerning international consumers who appreciate quality while being mindful of the way they live and what they buy. Our pared-down aesthetic is focused on fine fabrics, clean cuts, and considered details, bringing a quiet joy.

4). What is Varana’s message to the world of fashion design?

For the most part the world of fashion is focused on glamour, newness, constant change and instant gratification. None of this resonates with Varana’s world view or raison d’être. We believe in the simple pleasure that quality can bring, focusing on making things by hand for those of a discerning and refined taste, who make considered choices. Some of our pieces are heirlooms that can be passed down to successive generations. As the writer Anna Lappe has said "Every time you spend money, you cast a vote for the kind of world you want".

5). Walk us through the process of creating for Varana...

We start with moodboards relating to patterns, motifs, textures and colours connected with the concept. We also identify the craft techniques that would fit conceptually with the theme. For example, for this collection, we worked with wood block printing, Aari embroidery and Jamdani weaving, all of which were introduced by the Mughals and flourished under their patronage. The fabrics are then designed for weave or print and while these are being made, our designers start sketching the collection, deciding on the silhouettes and choosing the trims, buttons etc. Paper patterns are made based on the sketches and toiles are made in kora cotton fabric. Once the toile is finalised, the sample is made in the actual fabric. The same process is repeated for each garment in the collection. The label is the very last thing to go on and with it the final piece is ready to wing its way to the Dover Street store! 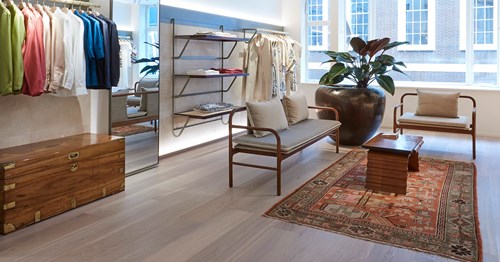 6). What are your plans for the future?

In our launch year, we have had customers from over 50 countries visit Varana, including style icons such as Bianca Jagger. While that tells you a lot about London, it also indicates that Varana has a true appeal that crosses borders. We plan to take the brand forward in an international way. New York is definitely on our radar! We have just started taking baby steps out into the world and plan to do many exciting things in the years ahead!

For more information or to start planning your tailor-made holiday, please get in touch:

Ampersand provided a bespoke and flexible holiday, tailored to my every whim. Their highly professional staff had only one goal which was to arrange an exceptional holiday and some unforgettable experiences in India. I have no hesitation in fully recommending them and they will be the first company I approach in the future - 10/10
- Anonymous, India
I had a very lovely time and was looked after splendidly. My first visit to India could not have been better, save for being longer! But I shall return at some point and I shall look to you to make the arrangements.
- Matthew Nicklin, North India
Everything you did for us whilst we were away was hugely appreciated, and Ampersand has been exemplary in every way. I'll always recommend you!
- Mr Richard Stoughton, Sri Lanka
I would recommend Ampersand without any hesitation!!! The best travel agent that I’ve ever had. Everything – from the individual care and attention in planning the trip, through to the efficiency of the agents on the ground in India – was handled brilliantly. An absolutely first-class service all round!
- Matthew Annable, Rajasthan, India
I thought the Ampersand team was outstanding. We couldn’t have hoped for anything more.
- Mr Geoffrey Johnson, India
Without question, you put together the best trip I have ever taken. We were shown around like visiting dignitaries, the hotels were fantastic and the itinerary was just right. Everybody I know will hear about how amazing Ampersand is!
- Leslie Siben, India
Difficult to articulate just how good the service from you and your team really was. We know you will continue to do well and hope we have the chance to seek your assistance again before long.
- Mr & Mrs Manson, North India
We had a wonderful holiday - everything was perfect. Thank you for helping us to make a thoughtful plan to enjoy and make most out of our trip. The places we visited, the guides, the transportation and driver, the hotels selected... Everything was great!
- Jaime Benitez, South India
So many highlights to choose from! The hotels were amazing but Maya Villa was a highlight… I loved just hanging out in the hammock reading my book and watching the peacocks chase the cows!
- Krista Weir, Sri Lanka
Ampersand’s preparation, attention to detail and interaction before and during our trip show exactly why good travel agents have a role in today’s internet booking age. They were a delight to deal with!
- Mr David Wallace, North India