The Andaman and Nicobar Islands are still largely virgin territory. We love them that way! An idyllic archipelago in the hazy heart of the Bay of Bengal, the 550 islands are part of India but stretch like a string of saltwater pearls from the southern tip of Burma to north of Sumatra. Most of these are protected reserves are not open to tourists and populated by ancient tribes and tropical wildlife.

With a landscape of curving palm-fringed white sand beaches, soaring jungle-covered peaks and coral reefs filled with tropical fish of every hue, we invite you to venture to a whole new world where the 21st century has yet to truly invade. With nine new flight connections opening up from the Indian mainland, access to this remote paradise is becoming more accessible. The season runs from November to mid-May, although there are less year-round weather fluctuations than the mainland. Take a plane to capital Port Blair followed by a two-hour boat journey to pristine Havelock Island. Port Blair is worth a visit; a mingling of the bustle and hubbub of a minor Indian city with cinnamon and sea salt scented air, pastel colonial bungalows and flower filled parks, the capital also boasts a few noteworthy historic relics such as the Japanese bunkers from WWII. Ampersand tips include learning about the indigenous island dwellers at the Anthropological Museum and taking a coral safari in the world’s fastest glass-bottomed boat on the Andaman Dolphin. Plump for the waterfront Sinclairs' Bay View hotel for an overnight stay. If feeling adventurous, decamp to Munda Pahad beach, 25 kilometres from town, for a sunset never to forget.

Havelock Island, named after Sir Henry of the 1857 Mutiny fame, is the largest of a chain of islands. It is the setting for, amongst other pleasures, two fabulous hotel openings that are garnering attention the world over: the newly opened Taj Exotica Resort and Spa and the boutique Jalakara, the vision of British duo, chef Mark Hill and designer Atalanta Weller. 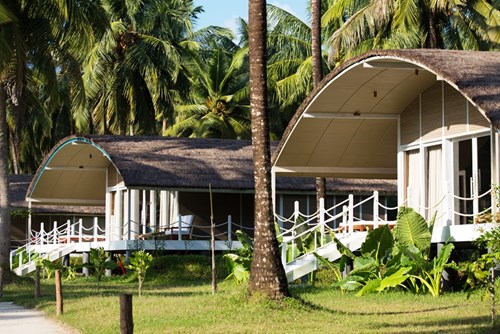 Iconic hotel group Taj have approached its newest offering with characteristic sensitivity befitting its location. The 72-villa Taj Exotica is a luscious and natural resort, a haven set in 46 acres of forest and mangroves alive with birdsong and flourishing wildlife. Preserving the fragile eco-habitats of the island has been given the highest priority. This is reflected in details such as the fact that not a single tree has been felled in the resort’s building and even an onsite bottling plant eliminating the use of plastic bottles. Charismatic General Manager, Abnash Kumar speaks with pride about their desire to 'elevate local cuisine, empower locals through employment and offering guests a culturally uplifting experience'. In short, creating a truly positive and seamless impact at this most delicate of destinations. From the lobby built on stilts looking out to azure waves and the 50-metre infinity pool, Taj Exotica has all the elements of the perfect paradise retreat.

We are excited about the promised curating of the island's unique history at the resort's three restaurants, each of which will tell the story of the populace. Learn about the courageous Indian freedom fighters imprisoned by the British in the haunting Cellular Jail and the brief occupation by the Japanese during WWII through a culinary exploration. The Andaman's are a melting pot of cultures and this will be reflected in the 'settler inspired' dishes served under the stars on the finest china. Seafood and the masalas of the coast will be celebrated at the Shoreline restaurant with a focus on the fishy fruits of the Bay of Bengal and surrounding tropical seas. The resort is set on crescent-curved Radhanagar Beach, often called the most beautiful beach in Asia and rated among the top ten in the world by 2017 TripAdvisor’s Travellers’ Choice Awards. Other beaches worth exploring on Havelock Island include Elephant beach with its sublime snorkelling amongst living coral reefs, reached by a 20-minute speedboat ride or (we recommend) a 2 kilometre jungle trek. Continue the lotus eating at nearby Vijaynagar beach with its seductive Mahua trees whose serpent-like trunks grow horizontally along the dunes before soaring upwards before taking a boat to Inglis Island where world-class scuba diving is available to all levels. 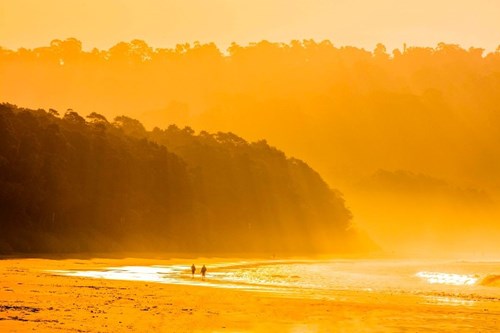 Further afield, there is still a plethora of splendid beaches to explore. Tranquil Kalipur in the far north is famous for turtle nesting – be still, watch as sea turtles lay their eggs on the beach. Meanwhile, the immaculate Interview Islands play home to a wonderful nature sanctuary. Then, there’s surfing on Little Andaman, the southernmost island, where the waves on Butler Bay beach make it one of the best surfing spots in India. For lesser water babies, the magical White Surf Waterfalls, hidden in the evergreen jungle, can be reached by a lovely hike – or take an elephant safari instead.

Come and discover this paradise for yourself while it is still a relatively undiscovered gem and prepare to fall utterly in love!


For more information or to start planning your tailor-made holiday to South India, please get in touch:

Everything you did for us whilst we were away was hugely appreciated, and Ampersand has been exemplary in every way. I'll always recommend you!
- Mr Richard Stoughton, Sri Lanka
We had a wonderful holiday - everything was perfect. Thank you for helping us to make a thoughtful plan to enjoy and make most out of our trip. The places we visited, the guides, the transportation and driver, the hotels selected... Everything was great!
- Jaime Benitez, South India
I thought the Ampersand team was outstanding. We couldn’t have hoped for anything more.
- Mr Geoffrey Johnson, India
Without question, you put together the best trip I have ever taken. We were shown around like visiting dignitaries, the hotels were fantastic and the itinerary was just right. Everybody I know will hear about how amazing Ampersand is!
- Leslie Siben, India
I would recommend Ampersand without any hesitation!!! The best travel agent that I’ve ever had. Everything – from the individual care and attention in planning the trip, through to the efficiency of the agents on the ground in India – was handled brilliantly. An absolutely first-class service all round!
- Matthew Annable, Rajasthan, India
I had a very lovely time and was looked after splendidly. My first visit to India could not have been better, save for being longer! But I shall return at some point and I shall look to you to make the arrangements.
- Matthew Nicklin, North India
Difficult to articulate just how good the service from you and your team really was. We know you will continue to do well and hope we have the chance to seek your assistance again before long.
- Mr & Mrs Manson, North India
Ampersand provided a bespoke and flexible holiday, tailored to my every whim. Their highly professional staff had only one goal which was to arrange an exceptional holiday and some unforgettable experiences in India. I have no hesitation in fully recommending them and they will be the first company I approach in the future - 10/10
- Anonymous, India
Ampersand’s preparation, attention to detail and interaction before and during our trip show exactly why good travel agents have a role in today’s internet booking age. They were a delight to deal with!
- Mr David Wallace, North India
So many highlights to choose from! The hotels were amazing but Maya Villa was a highlight… I loved just hanging out in the hammock reading my book and watching the peacocks chase the cows!
- Krista Weir, Sri Lanka