Japan is an incredibly intriguing and rewarding country to travel to; it is also a destination which the uninitiated have a lot of questions about. Here is our handy guide with the answers to the most common questions we get asked...

When is the best time to visit Japan?

Most people would say April for the cherry blossom, but then Japan is at its most crowded with lots of big tour groups.  We would say the autumn leaf season from mid-September through to the end of November is a better bet – the weather is surprisingly balmy and it’s a great time to find low season airfares and escape the rainy English autumn. The vivid leaves can be seen from the wilds of northern Hokkaido to the Japan Alps and the cities, while cherry blossom viewers tend to pack into a few key locations.
* For more details, read our article, 'Best time to visit Japan'.

What are the best destinations to visit in Japan?

Don’t miss Tokyo and Kyoto – you could spend a week in each and have enough variety and to make a great holiday, especially when excursions to Nikko, Kamakura, Hiroshima and Nara are included. But do aim to go a bit further than the stretch of bullet train line between Tokyo and Hiroshima. Small onsen towns in the Japan Alps north of Tokyo each have a magic of their own, and the northernmost island of Hokkaido is comparable to the rugged wilds of Scotland.

What are the top 5 things to do in Tokyo?

Go to a Ramen shop suffused with the smells of the food being industriously cooked up in front of you by the chefs while everyone from teenagers to salarymen chow down on the tasty noodles. Cycle around the temples and shrines of Kamakura an hour down the bay, with charming Enoshima island nearby. Shop at the flagship stores on Omotesando, or browse the boutiques for great gifts in trendy Daikanyama. Get a cocktail in the skybar at the top of Mori tower in Roppongi or the Metropolitan building in Shinjuku – Tokyo looks most stunning at night. Eat tapas-style for considerably less than London prices in an izakaya – halfway between a pub and a restaurant and invariably buzzing at the weekends. 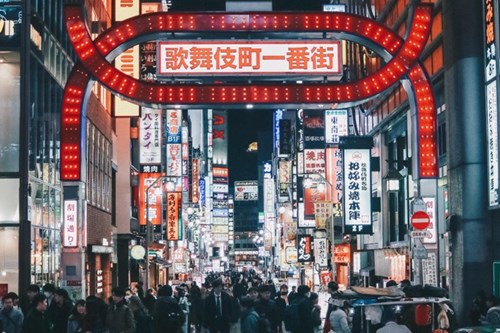 Is Japan a very expensive place to travel?

In terms of the parts we typically arrange for you in advance, Japan is no more expensive than a trip to any other top economies like America. Once there you’ll find a lot of things are considerably better value than the UK such as train travel (with the visitor’s Japan Rail Pass), food (a bowl of Ramen is typically £4) and entry fees (Japan’s grandest temples cost £3-£5 to get in, which is a snip compared to £20 or more at the UK’s main historic sites).

What are the best luxury hotels in Japan?

Aman Tokyo holds its own against the capital's stiff competition of luxury hotels, and we also love the The Palace Hotel. The Ritz-Carlton in Kyoto is the Imperial city's first truly top-end accommodation and does not disappoint.

What are the best ryokans in Japan?

Of the Japanese ryokan (traditional inns), our favourites are the Gora Kadan in Hakone and Lamp no Yado on the remote Noto peninsula across on the north side of the main island of Honshu. How many Michelin starred restaurants are there in Japan?

There are 30 three-Michelin-starred restaurants in Japan, 13 of which are in Tokyo – more than any other city in the world. Restaurants in Tokyo which have won a spot on the "exceptional cuisine that is worth a special journey" list include Ginza Kojyu, Ishikawa, Joël Robuchon, Nihonryori RyuGin, Kanda, Quintessence, Ryugin, Sukiyabashi Jiro Honten, Sushi Mizutani, Sushi Saito, Sushi Yoshitake, and Azabu Yukimura.

What is the best way to experience Japan’s cherry blossom season?

Our ‘Following the Cherry Blossom through Japan’ website itinerary starts in Kyushu and ends in Tokyo, which gives blossom viewing but also off-the-beaten track experiences rather than just focusing on Tokyo and Kyoto like most visitors do.

What does Kabuki mean?

Kabuki is a highly stylised form of theatre that relies on costumes, masks, miming and theatrical effect like trapdoors for its impact. There is dialogue as well though, so it is best experienced at the recently reopened theatre in Tokyo which has shows most days with English translation available on headsets. Plays are long – often three hours or so – but single-act tickets can now be purchased on the day. 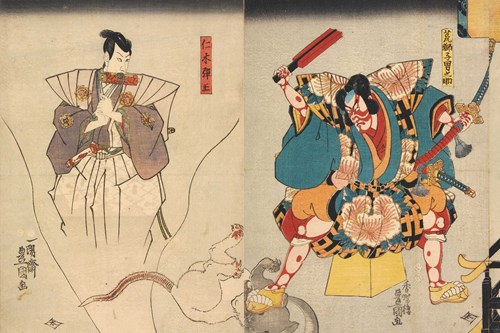 Who are the Harajuku girls of Tokyo?

Dressing up as characters from Japanese anime movies has long been something young people do for fun in Japan, and this craze expanded to include Lolita, cross-gender and Japanese goth ‘costume play’ subcultures amongst others. Takeshita street in Harajuku is the cultural centre of these fashions, and you can also catch the dancing Elvis Presley lookalikes at Yoyogi park around the corner on the weekend.

Where is the best place to ski in Japan?

Aman’puri mountain is the centre of Niseko resort on the northern island of Hokkaido, and has debatably the best runs and the most reliable powder through to March. There are several great resorts easily reached by train from Tokyo with slightly shorter seasons though, such as Hakuba and Myoko Kogen.

Where is the best place to see snow monkeys in Japan?

The hot springs outside Yudanaka in the Japan Alps are where the snow monkeys keep warm in the winter months. They have become an iconic image of Japan so expect the park to be crowded. 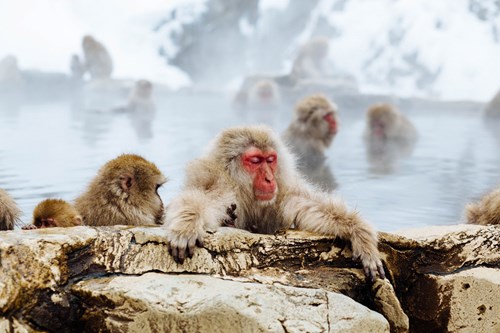 Where are the best hot springs in Japan?

There are thousands of spots across this volcanic island chain. Hakone-Izu national park near Mt Fuji probably has the best variety of bathing spots and Japanese ryokan (spa hotels), but for the quintessential bathing experience head to Kinosaki from Kyoto for a night. This small town is devoted to hot spring bathing, with guest of the great local ryokan walking from one public bath to another in Japanese ‘yukata’ (evening robe) and ‘geta’ (traditional clogs).

Where can you find the best architecture in Japan?

From the glitzy towers of the Ginza district to the faded grandeur of the Imperial Palace, Tokyo is a wonderful location for lovers of architecture, old and new. We also recommend visiting the great wooden temple at Nara, which houses enormous statues from Buddhist lore, as well as a trip to the ornate Chinese-influenced temples in the forest in Nikko.

Where is the best place to see geishas in Japan?

Sadly it is a dying art, with fewer and fewer girls entering into the long and sometimes arduous training. Geisha and the apprentice Maiko can still be seen in the Gion area of Kyoto and also Kanazawa ‘chaya’ (teahouse) districts. Where are the best beaches in Japan?

The Japanese head in droves to the beaches of the Okinawa island chain, and we recommend the relatively uncrowded southernmost Yaeyama Islands.

Where is the best place to go hiking in Japan?

From Tokyo, head to Mt Takao. In the Japan Alps there are some great routes leading to and from the mountain plateau of Kamikochi. Perhaps the best expanse for hiking is Daisetsuzan national park on the northern island of Hokkaido, where Japanese hikers do three and four day treks using simple accommodation huts.

What is the best family holiday to Japan?

The great thing about Japan is that fun family experiences can be found along the way, from junior sumo training in Tokyo to dressing as a Geisha in Kyoto and a host of theme parks. The more remote temples are also great fun for exploring, with a real Indiana Jones feel. 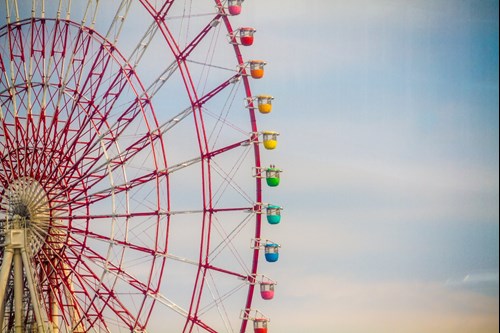 How easy is it to travel in Japan?

It is easier to travel in Japan than the UK. Late trains are almost unheard of, even by a minute, and main train schedules are ingeniously aligned. One frequently steps off the train to find the connecting one waiting on the opposite platform. The Japan Rail Pass and other transport passes make it easy for visitors to use services. And once on board, standard class is arguably as good as UK first class.

Is it difficult to travel in Japan if you don’t speak Japanese?

There is more and more English on signs in Japan, even in remote areas. It is true that most Japanese people don’t speak English, but this is gradually changing as a sandwich year in America has been popular amongst students for a while now. Japanese people generally go out of their way to help you even if they don’t speak English – just write down what you’re looking for and they will use your map or their iPhone or sometimes just take you where you need to go!

How many days holiday do I need to see Japan?

We would say the first trip is generally intended to get you to the iconic sights with one or two off-the-beaten track locations to help you discover what you love about Japan – 12 nights would be perfect for this. People generally come back with a firmer idea of what they love, be it shrines or hiking or modern architecture. A second trip can be built around these personal passions, but it takes a third trip to really go beyond the Japan now signposted in English to remote spots on the remote peninsulas and outlying islands. We suggest starting and ending your trip in Tokyo as one normally arrives there pretty jet lagged and it can be quite overwhelming, so dip into to it twice to see it once you have adjusted to the time difference and have a better understanding of how everything works.

For more information or to start planning your own luxury holiday to Japan, please contact one of our Japan specialists: info@ampersandtravel.com / +44 (0)20 7819 9770 Difficult to articulate just how good the service from you and your team really was. We know you will continue to do well and hope we have the chance to seek your assistance again before long.
- Mr & Mrs Manson, North India
I would recommend Ampersand without any hesitation!!! The best travel agent that I’ve ever had dealings with. Everything – from the individual care and attention in helping to plan the trip, through to the efficiency of the agents on the ground in India – was handled brilliantly. An absolutely first-class service all round.
- Matthew Annable, Rajasthan, India
Everything you did for us whilst we were away was hugely appreciated, and Ampersand has been exemplary in every way. I'll always recommend you!
- Mr Richard Stoughton, Sri Lanka
Ampersand’s preparation, attention to detail and interaction before and during our trip show exactly why good travel agents have a role in today’s internet booking age. They were a delight to deal with!
- Mr David Wallace, North India
Without question, you put together the best trip I have ever taken. We were shown around like visiting dignitaries, the hotels were fantastic and the itinerary was just right. Everybody I know will hear about how amazing Ampersand is!
- Leslie Siben, India
So many highlights to choose from! The hotels were amazing but Maya Villa was a highlight… I loved just hanging out in the hammock reading my book and watching the peacocks chase the cows!
- Krista Weir, Sri Lanka
We had a wonderful holiday - everything was perfect. Thank you for helping us to make a thoughtful plan to enjoy and make most out of our trip. The places we visited, the guides, the transportation and driver, the hotels selected... Everything was great!
- Jaime Benitez, South India
I thought the Ampersand team was outstanding. We couldn’t have hoped for anything more.
- Mr Geoffrey Johnson, India
I had a very lovely time and was looked after splendidly. My first visit to India could not have been better, save for being longer! But I shall return at some point and I shall look to you to make the arrangements.
- Matthew Nicklin, North India