At Home at Highclere: Dining at the real Downton Abbey

At the heart of the award-winning period drama, Downton Abbey, lies the grand house and estate of the Crawley family. Highclere Castle, the 19th century home of the Earl and Countess of Carnarvon is its real life setting and a jewel of English heritage. Designed by Sir Charles Barry, of the Houses of Parliament fame, and surrounded by a glorious Capability Brown park, Highclere combines a rich history with a very real family home. Fiona, Lady Carnarvon, who has lived here since marrying the 8th Earl in 1999, is a historian and author. Passionate about Highclere’s heritage and having published two acclaimed biographies of past countesses, Lady Carnarvon has recently written the fascinating story of entertaining at the great house entitled ‘At Home at Highclere’. Delving into archives, diaries and menus, this richly illustrated book takes the reader on a journey through various weekend house parties from the Victorian heyday of aristocratic and political gatherings to the present day, where the Carnarvon’s open their home to family, friends and visitors from all over the world. Here Lady Carnarvon shares with Ampersand Travel about the journey of the book and its inspirations.

1). Your recent book, At Home at Highclere, is a sumptuous feast through the golden ages of entertaining at Highclere Castle. What first inspired you to begin writing it?
I was turning round in my mind the idea of what makes a home, and the line delivered by Maggie Smith in Downton Abbey “What is a weekend?”
Highclere has been hosting house parties for centuries. I was looking to create something readers might enjoy, and share with them the all the fascinating details in an illustrated book. I was thus able to explore what visitors may not have seen and it is a many layered book. As well as the photographs, there are charming letters and sketches from the archives. At the centre of every home is cooking, and as we are also a farm the recipes in the book very much reflect the seasons, the traditions and the diversity. I am passionate about promoting the link from field to food on the table – about where it comes from and how we can look after the land and the produce and finally how we can cook it. 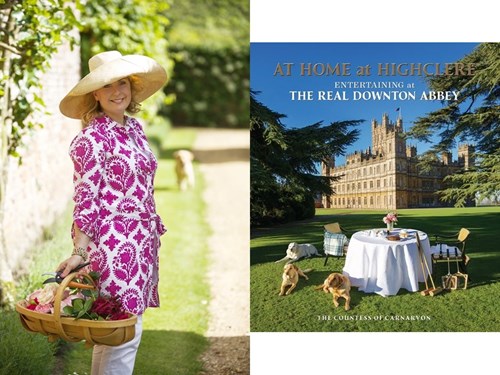 2). The first weekend you describe features the renowned Prime Minister, Disraeli - was Highclere a political lion's den in its heyday? Did Disraeli have a personal connection to the family at the time?
The 4th Earl of Carnarvon spent some 40 years in politics. This chapter explores their relationship and politics over that weekend. I hope I have brought out the issues with which they were dealing and their personal attitudes. There is so much to be gleaned from small details and I very much enjoyed writing this story.

3). Almina, the 19th century chatelaine of Highclere, is an extraordinary character and you wrote about her life in a previous book - did she create much of what Highclere is today?
I tend to think that Almina’s legacy is that we are still here. Apart from her financial legacy I am proud that Highclere has highlighted her contribution to other people’s lives and I hope that is her legacy which we continue today.

4). It must have been fascinating delving into such rich archives for material - do any particular discoveries stand out in your mind?
I have not yet delved sufficiently into the archives to know what I do not know or what I might find. I was amazed to find the story about Canada and their founding fathers among the many travellers and visitors who have made their way here. Of course other well-known dignitaries such as Prince Victor Duleep Singh spent much time here; I can find links and thread of stories about early aviation (the first flight in England was made by Geoffrey de Havilland from Highclere in September 1910) to Lawrence of Arabia and former Prime Minister Harold Macmillan.

5). Of all the guests who have stayed at Highclere in the last 150 years who would you love to have to dinner now?
I think I would spend so long thinking about the answer I cannot give you one! In a sense this book reflects my own indecision! 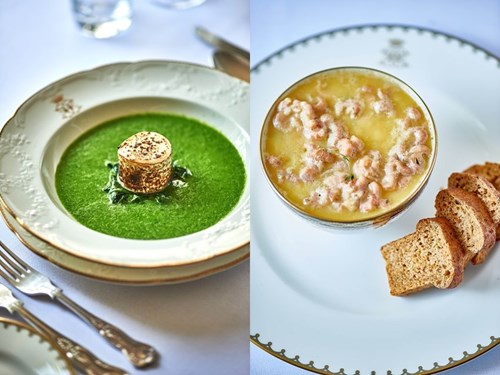 6). You intertwine anecdotes about the house staff in the book, are any of the characters from Downtown Abbey inspired from real-life staff that have been such a valued part of life at Highclere?
Julian Fellowes created his own characters, probably inspired by various people he knew, or had met or some glimpse into a life which he has then brought to life. ‘At Home at Highclere’ shares the richness of real people I am privileged to know and work with here. I do not have a favourite and each portrait I hope reflects each voice, whether Margery or Les, Pat, Mike, Eddie or Diana.

7). What is your favourite menu at Highclere today when entertaining on a grand scale?
Planning on a grand scale can mean a small number of VIPs or a large number, to celebrate my husband’s birthday for example. The menus change according to season and guests, so I tend to start to plan with our head chef Paul Brooke-Taylor and the knowledge of the guests and time of year.

8). Do you have any further books in the pipeline?
I have two further books on my mind - the first again is illustrated and the second a historical biography – I am unable to announce them quite yet!


If you would like more information or want to start planning your own tailor-made holiday to the British Isles, please do get in touch:

We had a wonderful holiday - everything was perfect. Thank you for helping us to make a thoughtful plan to enjoy and make most out of our trip. The places we visited, the guides, the transportation and driver, the hotels selected... Everything was great!
- Jaime Benitez, South India
Ampersand provided a bespoke and flexible holiday, tailored to my every whim. Their highly professional staff had only one goal which was to arrange an exceptional holiday and some unforgettable experiences in India. I have no hesitation in fully recommending them and they will be the first company I approach in the future - 10/10
- Anonymous, India
Everything you did for us whilst we were away was hugely appreciated, and Ampersand has been exemplary in every way. I'll always recommend you!
- Mr Richard Stoughton, Sri Lanka
I would recommend Ampersand without any hesitation!!! The best travel agent that I’ve ever had. Everything – from the individual care and attention in planning the trip, through to the efficiency of the agents on the ground in India – was handled brilliantly. An absolutely first-class service all round!
- Matthew Annable, Rajasthan, India
Ampersand’s preparation, attention to detail and interaction before and during our trip show exactly why good travel agents have a role in today’s internet booking age. They were a delight to deal with!
- Mr David Wallace, North India
Difficult to articulate just how good the service from you and your team really was. We know you will continue to do well and hope we have the chance to seek your assistance again before long.
- Mr & Mrs Manson, North India
So many highlights to choose from! The hotels were amazing but Maya Villa was a highlight… I loved just hanging out in the hammock reading my book and watching the peacocks chase the cows!
- Krista Weir, Sri Lanka
Without question, you put together the best trip I have ever taken. We were shown around like visiting dignitaries, the hotels were fantastic and the itinerary was just right. Everybody I know will hear about how amazing Ampersand is!
- Leslie Siben, India
I had a very lovely time and was looked after splendidly. My first visit to India could not have been better, save for being longer! But I shall return at some point and I shall look to you to make the arrangements.
- Matthew Nicklin, North India
I thought the Ampersand team was outstanding. We couldn’t have hoped for anything more.
- Mr Geoffrey Johnson, India