Ballyfin - A history & restoration of the ‘best hotel in the world’

The heart of Ireland is often overlooked for its coastal counterparts with visitors flocking to the delights of West Cork and the rugged Connemara coast. However, within their green valleys and rolling hills, Ireland’s inland counties boast some unforgettable sights such as Newgrange, one of the most remarkable prehistoric sites in Europe. A Stone Age underground passage tomb, dating from around 3200 BC, older than Egypt's pyramids by some six centuries. Further south lies Birr Castle with the largest private garden in the country and a unique collection of trees from all the world. But the jewel in the crown is the breathtaking Ballyfin, called by Conde Nast Traveller ‘the best hotel in the world’ and the subject of a sumptuous book, Ballyfin – The Restoration of an Irish House & Demesne. 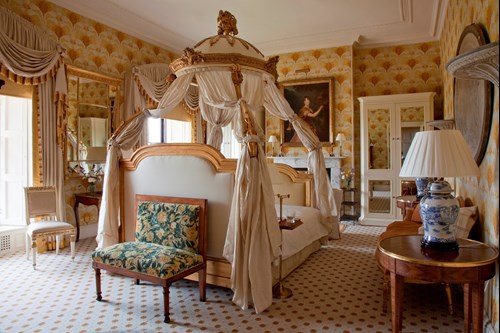 The Regency house is grand, handsome and sparely elegant on approach, its pillared entrance looking out onto the changing colours of the Slieve Bloom mountain range. Following an astonishing nine-year restoration and opening in 2011, Ballyfin has welcomed a stream of distinguished guests (usually by helicopter) - even Kim Kardashian and Kanye West honeymooned here. In a land famed for beautiful houses, Ballyfin has been transformed into the most wonderful of them all. The setting itself has always held a fascination for visitors. Emily Fitzgerald, the Countess of Kildare – a remarkable figure and mother of 22 children – wrote in 1759:  “. . . Yesterday, I saw a most delightful place indeed, much beyond any place I have seen in Ireland – Ballyfin . . .” Stretching back into the mists of Celtic history, Ballyfin is said to have been the birthplace of mythical hunter-warrior Fionn mac Cumhaill. Legend says he built the Giant’s Causeway with his own hands. Eighteenth-century owner William Pole, who inherited the estate, created a paradise based on the design philosophies of Capability Brown. Natural and sweeping vistas,   gardens, temples and follies to delight the eye, a lake teeming with ornamental fish and a winding driveway that unveils the house to visitors with all the art of a courtesan. The demesne passed to Pole’s nephew, William Wellesley, elder brother of the famed Duke of Wellington. Preferring Grosvenor Square to the damp midlands of Ireland, Wellesley did not spend much time at Ballyfin. Bought by the wealthy Coote family in 1813, the estate gained the grand centrepiece of Ballyfin House when owner Sir Charles Coote engaged the most famous architects in the country, Richard and William Morrison to create a seat to out rival any others. The Coote family lived at Ballyfin for 200 years until the troubles of the Irish Independence caused the then owner to sigh ‘nothing will ever be the same again’ and sell the land and house in 1928 to the Catholic order of the Patrician Brothers. The brothers ran a school for many years and left the house largely untouched bar converting the dining room into a chapel. Ballyfin fell into dangerous disrepair over time with the magnificent orangery, designed by Richard Turner of Kew Gardens Great Palm House fame, becoming a shell. This sad state of affairs found a saviour in the form of American renaissance couple Fred and Kay Krehbiel They rescued the house and set about the glorious restoration through  “a desire to recreate the great hospitable tradition, the luxury and the atmosphere of the Irish country house”. Today the rooms brim with gleaming portraits and burnished silks, both inviting and authentic, Enchanting touches and remnants of the past are everywhere. The Rotunda hall has an inlaid floor inspired by the Alhambra Palace in Granada and the vast antlers of a 10,000 year old Irish Elk. There are secret doorways and even a 19th-century ‘whispering room’. Bedroom walls are hung with Flemish tapestries and one revels in a bed ‘shaped like a Fabergé egg’ as well as a Roman sarcophagus bath, brought to Ballyfin by Sir Charles Coote in 1822 after his Grand Tour.  Each suite is named after a historical character associated with the house and the last word in comfort with an almost pre-war decadence to every touch. 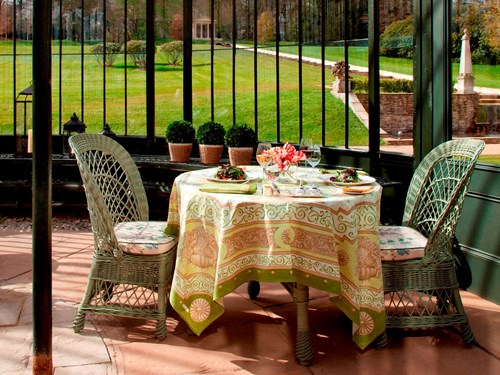 Guests exploring the grounds can discover enchantments such as Lady Coote’s Peacock Aviary, restored to splendour, the round tower, from the top of which 16 counties can be seen, and the Cascade Waterfall.  The Gardener’s Cottage has just been transformed into a romantic bolthole for two with copper bathtubs and roaring fires. If there ever was an Irish Downton Abbey, this is it.

For more information or to start planning your tailor-made holiday to The British Isles, please contact us:

So many highlights to choose from! The hotels were amazing but Maya Villa was a highlight… I loved just hanging out in the hammock reading my book and watching the peacocks chase the cows!
- Krista Weir, Sri Lanka
We had a wonderful holiday - everything was perfect. Thank you for helping us to make a thoughtful plan to enjoy and make most out of our trip. The places we visited, the guides, the transportation and driver, the hotels selected... Everything was great!
- Jaime Benitez, South India
I had a very lovely time and was looked after splendidly. My first visit to India could not have been better, save for being longer! But I shall return at some point and I shall look to you to make the arrangements.
- Matthew Nicklin, North India
Ampersand’s preparation, attention to detail and interaction before and during our trip show exactly why good travel agents have a role in today’s internet booking age. They were a delight to deal with!
- Mr David Wallace, North India
I would recommend Ampersand without any hesitation!!! The best travel agent that I’ve ever had. Everything – from the individual care and attention in planning the trip, through to the efficiency of the agents on the ground in India – was handled brilliantly. An absolutely first-class service all round!
- Matthew Annable, Rajasthan, India
Difficult to articulate just how good the service from you and your team really was. We know you will continue to do well and hope we have the chance to seek your assistance again before long.
- Mr & Mrs Manson, North India
I thought the Ampersand team was outstanding. We couldn’t have hoped for anything more.
- Mr Geoffrey Johnson, India
Ampersand provided a bespoke and flexible holiday, tailored to my every whim. Their highly professional staff had only one goal which was to arrange an exceptional holiday and some unforgettable experiences in India. I have no hesitation in fully recommending them and they will be the first company I approach in the future - 10/10
- Anonymous, India
Everything you did for us whilst we were away was hugely appreciated, and Ampersand has been exemplary in every way. I'll always recommend you!
- Mr Richard Stoughton, Sri Lanka
Without question, you put together the best trip I have ever taken. We were shown around like visiting dignitaries, the hotels were fantastic and the itinerary was just right. Everybody I know will hear about how amazing Ampersand is!
- Leslie Siben, India