Ladakh - Summer on the Silk Route

‘If you're really listening, if you're awake to the poignant beauty of the world, your heart breaks regularly. In fact, your heart is made to break; its purpose is to burst open again and again so that it can hold evermore wonders.’ So wrote Andrew Harvey, author of the classic tale of pilgrimage A Journey through Ladakh. A tiny mountain kingdom nestled in the Himalayas and annexed to the much larger Indian state of Jammu & Kashmir, Ladakh has been captivating the most intrepid travellers since the mists of time. Pliny the Elder wove hazy tales of gold washing there in the first century and its position on the Silk Route ensured a melting pot of vagabonds, saints, settlers and legends. Invaded by Tibetans, Mongols, Rajputs and a fascinating long-lost Kushan empire, Ladakh has been coveted for centuries yet has retained its sang-froid identity, remaining one of the most intact Tantric Buddhist societies on earth, both tranquil and otherworldly. 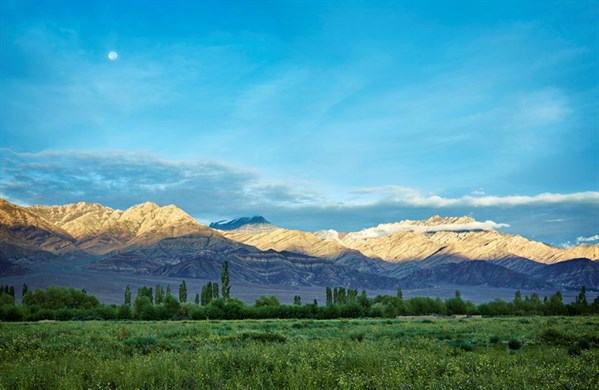 What was once a gruelling bus journey overland from Delhi is now a mere one-hour flight and this most reclusive of plateau kingdoms has opened up to a fresh generation of travellers with sustainable and memorable places to stay unfurling in this ‘heaven on earth’.

Think of the high Himalayas and your mind will wander to jagged snow-capped peaks. However Ladakh in the summer is a paradise with temperatures averaging a delicious 20-30 degrees and offering unparalleled trekking amongst carpets of wild flowers and jewel-like glaciers glinting under cobalt skies. 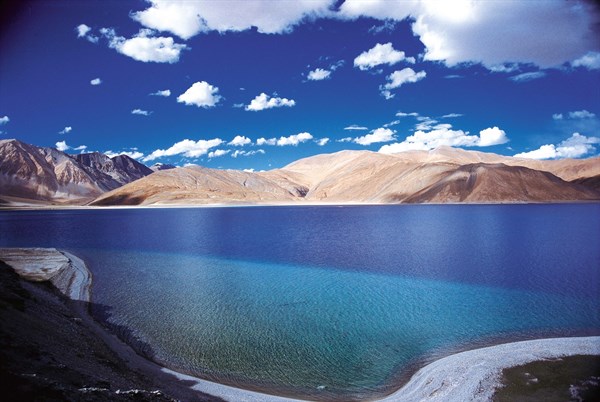 Decadence and spirituality are entwined 30 kilometres outside Leh, the most relaxed capital city you will ever encounter, at Chamba Camp, Thiksey run by The Ultimate Travelling Camp, a collection of Silk Route – inspired tents perched at the base of the iconic Thiksey Monastery. Deeply luxurious with four-poster beds and teak bathrooms, each tent is a miniature palace in its own right and an exquisite base to explore this most magical of landscapes. Now in its third year and given accolades by the likes of Vanity Fair, Chamba Camp, Thiksey is a privileged window into the heart of Ladakh, with private audiences with the venerated Rinpoche of Thiksey Monastery, sunrise morning prayer amongst the monks, archery, polo and rafting trips along the gentle Indus River all part of the camp experience, each unforgettable in their own right. The camp is overseen by the indefatigable Maggi Nixon, who has a profound understanding of the local culture honed from years of creating bespoke experiential itineraries for guests. In her own words ‘laying out a feast of the unique, the irreplaceable and the irresistible with an intimate glimpse into this ancient frontier land’. The Ladakhis are a devout people, gaily coloured prayer flags flutter against the bone-hued slopes and monasteries are thriving communities knitted into the local scene. It is also a place close to His Holiness The Dalai Lama’s heart and this August will see him visiting Thiksey Monastery to both teach and receive blessings for a long life in a deeply moving ceremony. His jauntily coloured palace can be seen from the road travelling between Leh and the camp. 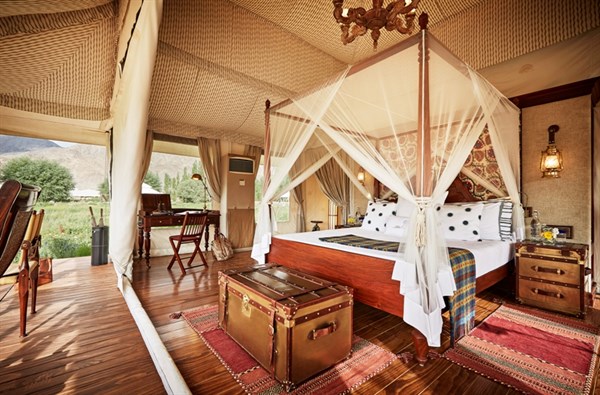 The villages of Ladakh, strewn with apricot orchards and stately poplar trees, are a delight to discover with joyous encounters guaranteed. Delhi-based travel company Shakti have recently launched a new riverside ‘village house’ to add to their collection, allowing guests to sleep in the bosom of the community. Visiting children can spend time with a young monk and a day can be spent picnicking near the royal palace and with a Tibetan medicine man. Each village house has been sensitively and delightfully restored by Bangalore-based designer Eleanor Stanton who describes her growing love affair with the nuances of Ladakhi village life, ‘I noticed a metal coffee pot that every home has to keep butter tea warm. The battered pot was an aged peppermint and rust explosion of flowers. I loved the colouring against the huge windows framing mesmerising views of two hilltop monasteries and the Indus River.’ The village houses, curated and cosy, mirror the mingled heritage that makes Ladakh so unique.‘The Tibetan hand-paintings are done by the master Thangka painter, Padmaji, all the fabrics are sourced from the Himalayan regions, heavy linens and hemp with beds draped in hand-woven local soft wool, the story of a region can be told in a tactile way through its fabrics’, Stanton reflects. This intuitive and authentic approach fits seamlessly with the deeply peaceful Ladkhi way of living, an ethos which, in this most tumultuous of times, awaits with arms wide open for discovery at ‘the roof of the world’. 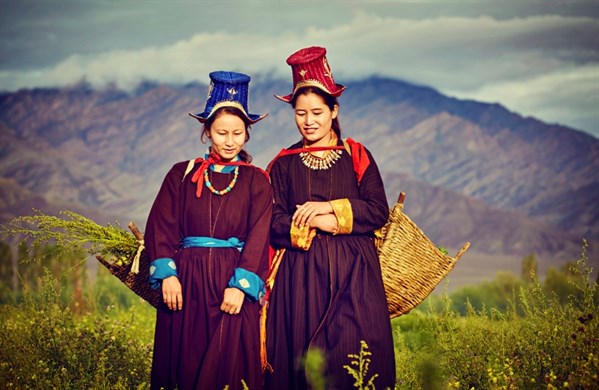 For more information or to start planning your tailor-made holiday to Ladakh, please contact us:

So many highlights to choose from! The hotels were amazing but Maya Villa was a highlight… I loved just hanging out in the hammock reading my book and watching the peacocks chase the cows!
- Krista Weir, Sri Lanka
Everything you did for us whilst we were away was hugely appreciated, and Ampersand has been exemplary in every way. I'll always recommend you!
- Mr Richard Stoughton, Sri Lanka
We had a wonderful holiday - everything was perfect. Thank you for helping us to make a thoughtful plan to enjoy and make most out of our trip. The places we visited, the guides, the transportation and driver, the hotels selected... Everything was great!
- Jaime Benitez, South India
Without question, you put together the best trip I have ever taken. We were shown around like visiting dignitaries, the hotels were fantastic and the itinerary was just right. Everybody I know will hear about how amazing Ampersand is!
- Leslie Siben, India
Ampersand’s preparation, attention to detail and interaction before and during our trip show exactly why good travel agents have a role in today’s internet booking age. They were a delight to deal with!
- Mr David Wallace, North India
Ampersand provided a bespoke and flexible holiday, tailored to my every whim. Their highly professional staff had only one goal which was to arrange an exceptional holiday and some unforgettable experiences in India. I have no hesitation in fully recommending them and they will be the first company I approach in the future - 10/10
- Anonymous, India
Difficult to articulate just how good the service from you and your team really was. We know you will continue to do well and hope we have the chance to seek your assistance again before long.
- Mr & Mrs Manson, North India
I thought the Ampersand team was outstanding. We couldn’t have hoped for anything more.
- Mr Geoffrey Johnson, India
I had a very lovely time and was looked after splendidly. My first visit to India could not have been better, save for being longer! But I shall return at some point and I shall look to you to make the arrangements.
- Matthew Nicklin, North India
I would recommend Ampersand without any hesitation!!! The best travel agent that I’ve ever had. Everything – from the individual care and attention in planning the trip, through to the efficiency of the agents on the ground in India – was handled brilliantly. An absolutely first-class service all round!
- Matthew Annable, Rajasthan, India