I recently had the immense pleasure of travelling to Namibia, one of the countries that has long been on my bucket list.

Our journey began in Namibia’s Capital, Windhoek located in the country’s central highlands, and here we spent the night in Galton House located close to the city centre. I found it to be a lovely eco-friendly, owner-run house, with gorgeous décor and friendly service. The rooms are tastefully decorated with large king size beds, a reading desk and spacious bathrooms. 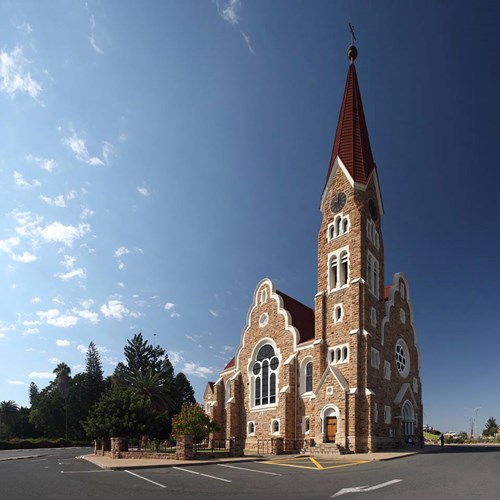 The following morning, we head off early for the first leg of our journey to Okonjima Game Reserve. En-route we made a stop at Okahandja to visit the largest market, where you can find all sorts of local treasures. We arrived at Okonjima after lunch, and head off on our afternoon activity, leopard tracking. The leopards and cheetah on the reserve are fitted with radio collars, and a telemetry system is used to track them. This by no means takes you to the animal but only gives you a rough idea of where they are within the park. We were unsuccessful with tracking the female leopard that afternoon but did see much plains game such as zebra, kudu and warthog. As the sun began to set, we pulled up in an open plain for sundowners. With drink in hand, the sun sank below the horizon in the west, with the full moon rising in the east – what an amazing way to begin our trip!

Darkness fell, and we retreated into the vehicle making our way slowly back to the lodge. On our way back, our guide spotted a pair of shining yellow eyes in the bush… it was Fatty, a 14-month-old male leopard whose mother we had been tracking earlier! He made his way to the vehicle where he walked passed us and lay in the middle of the road for about 5 minutes, as if posing for a photoshoot, before slowing slinking back into the darkness. A deliciously fresh three-course meal awaited us back at the lodge, and during our meal we were asked if we wanted to visit the nocturnal hide afterwards. This is a great opportunity to see the lesser spotted animals, such as honey badgers, porcupines, caracals, leopard and brown hyena – we were extremely lucky to see three brown hyena and a black-backed jackal.

The rooms at Okonjima Bush Camp were superb, with glass windows in the front offering views of the plain ahead. Each room comes equipped with a private sala with two day-beds, a mini bar and a jar of bird seed for the resident Guineafowl, as well as a bird bath for attracting an array of birdlife and small game such as impala and jackal. The following morning was another early start, as we departed for an amazing opportunity to track cheetah on foot! We began at the look-out point, and with stunning views over the reserve we could spot the tawny heads of giraffe among the treetops, and a lone gemsbok bull marking his territory. After a short stroll we came across two cheetah brothers, Spitfire and Sniper, wild but habituated cheetah who are used to human presence but will not let you close enough to interact with them. After 20 minutes with the brothers, before they walked off toward a herd a temporarily unsuspecting impala, we headed to the Africat Foundation to learn about how the project assists local farmers with ‘problem’ cats preying on their livestock. The foundation has a good relationship with the farmers, and it has set up humane traps which allow the cats to be relocated into a safer environment.

From Okonjima we travelled northwest to Mowani Camp in Damaraland and rushed to catch the sunset. On arrival the reason for our hurried journey was apparent; the view from the lodge faces due west which provides the most incredible sunset spot. After a night in the tents, which are simplistic to blend with their surroundings and are dotted between the boulders, we travelled to Twyfelfontein to view the prehistoric rock art. The engravings hold a huge spiritual connection and the site has an almost supernatural feel, giving a small insight into the relationships these people had with the environment and its animals. We spent the rest of the morning charging around the dry riverbeds in search of the desert elephants but without any luck. It’s amazing how such large animals can virtually go undetected in the shade of a tree! 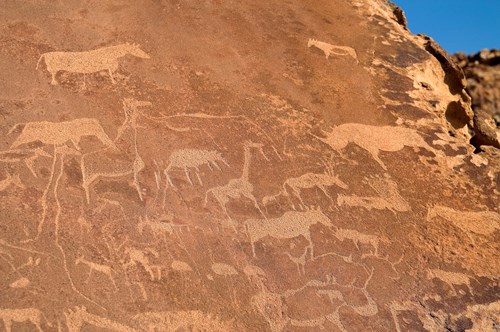 Set along the base of a mountain range in a rocky environment, we spent the night at Damaraland Camp. Our drive here from Mowani was the most spectacular, with the terrain constantly changing from rocks to sand dunes to open savannahs blanketed by a grass green carpet, not seen in about 7 years due to the lack of rain!

Early the next morning we made our way north to the Palmweg region where we visited the iconic Himba tribe. Their relatively traditional ways are still part of their culture, but as westernisation creeps in the younger generations are starting to go to school and wearing cloths. We spent two hours with the tribe, learning about their way of life and how they came to settle in Namibia after leaving Angola. Leaving the Himba tribe it was an exhausting eleven-hour journey to our camp, Huab Under Canvas, which was my favourite out of all the camps we stayed at. The eight basic tents come complete with camp cots, open air bathrooms with a flushed loo and bucket shower, and the lights are powered by solar. Although simplistic everything you need is catered for, and there is something comforting about being completely emerged in the wilderness. 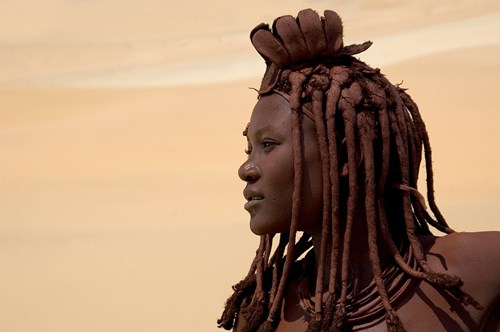 The main activity at Huab is black rhino tracking, which would make the hair of any avid bush lover stand on end, as they are one of the most aggressive and unpredictable animals in the African bush. Tracking is a skill, and these trackers are experts, reading the faintest of tracks in the ground, and after just a few hours, they had two rhinos in sight. Having had a relaxed morning, we were driven towards where the rhino had been spotted, and after a stern briefing by the tracker and a short walk, we were within 100 meters of these majestic creatures. At first, they were both laying down but as we walked towards them they jumped to their feet, listening to our every move. Rhino have terrible eyesight but can hear and smell incredibly well. It was terrifying but overwhelming being in their presence, and it will remain the most incredible experiences of my entire life. What felt like 30 minutes was realistically five, and we slowly left with a few photographs but a lasting memory. Our two nights here, with no mobile signal or Wi-fi, felt like heaven on earth and we were able to completely immerse ourselves in the experience.

At day seven our Damaraland experience had come to an end. We left early in the morning for the 2-hour drive to Doro Nawas airstrip for our flight to Sossusvlei, and the flight was incredible! I grew up in Botswana, flying over the Okavango Delta and I thought nothing would come close to being as magnificent, but this certainly did! Flying over sandwich harbour and the saltpans where we saw flocks of pink flamingos and Walvis Bay where we saw whales, seal colonies and two ship wrecks. Once inland our attention turned to the massive dunes, the whiter dunes are younger, and the older dunes are redder in colour. 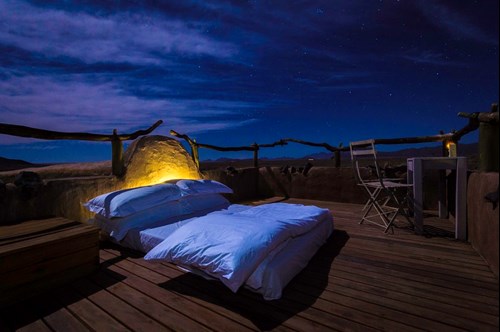 Our first night was spent at Little Kulala, a lovely lodge which sits just outside of Sossusvlei. This was the first lodge we stayed at that offered a sleep-out experience, where a bed on top of your room is made up to sleep out under the stars. We were up early the next morning to get to Sossusvlei before the buzzing crowds and Little Kulala has the added benefit of a private entrance into the park, making it more easily accessible. Big Daddy is the largest dune and we managed to climb a bit of the dune before returning to the lodge to freshen up for our flight to Wolwedans. Wolwedans is an amazing property; their practise of sustainable tourism is revolutionary, and they are constantly looking at ways of improving. Our experience started at the ‘village’ where the airstrip is and where guest’s check-in. Our tour of the ‘village’ was where we were exposed to the incredible sustainable tourism efforts the reserve is making. They have their own vegetable gardens, pigs, solar farm and make use of plastic bottles to construct staff housing. The hotel is run by a huge back-of-house team, ensuring everything runs smoothly! Our 2-hour drive to Boulders Lodge was spectacular with every corner surprising us with a different terrain. The lodge sits tucked away against a clump of boulders and overlooks an expanse of land giving you the feeling you are in the middle of nowhere; this is the perfect place to stay if you are looking for ultimate exclusivity. Although not best known for it’s big game, there are a variety of activities to keep one occupied, however one might simply choose to relax enjoying the stunning landscapes. This is also one of the best regions for star gazing. 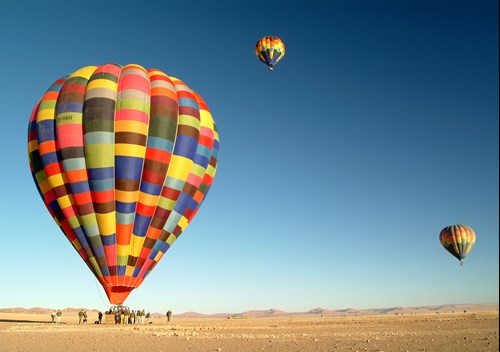 After an hour flight to Windhoek we were transferred to The Olive Exclusive for our last night in Namibia, which was a welcome luxury after being in the desert sand for three days! It’s a wonderfully decorated guest house in a quiet location within the suburbs of Windhoek, and we had the afternoon to relax before having dinner with Ultimate Safaris to reflect on our amazing trip.

Namibia is the essence of space and silence, resulting in a feeling of peace and solitude – I can’t wait to go back!

So many highlights to choose from! The hotels were amazing but Maya Villa was a highlight… I loved just hanging out in the hammock reading my book and watching the peacocks chase the cows!
- Krista Weir, Sri Lanka
Everything you did for us whilst we were away was hugely appreciated, and Ampersand has been exemplary in every way. I'll always recommend you!
- Mr Richard Stoughton, Sri Lanka
We had a wonderful holiday - everything was perfect. Thank you for helping us to make a thoughtful plan to enjoy and make most out of our trip. The places we visited, the guides, the transportation and driver, the hotels selected... Everything was great!
- Jaime Benitez, South India
I had a very lovely time and was looked after splendidly. My first visit to India could not have been better, save for being longer! But I shall return at some point and I shall look to you to make the arrangements.
- Matthew Nicklin, North India
I thought the Ampersand team was outstanding. We couldn’t have hoped for anything more.
- Mr Geoffrey Johnson, India
Difficult to articulate just how good the service from you and your team really was. We know you will continue to do well and hope we have the chance to seek your assistance again before long.
- Mr & Mrs Manson, North India
Without question, you put together the best trip I have ever taken. We were shown around like visiting dignitaries, the hotels were fantastic and the itinerary was just right. Everybody I know will hear about how amazing Ampersand is!
- Leslie Siben, India
I would recommend Ampersand without any hesitation!!! The best travel agent that I’ve ever had dealings with. Everything – from the individual care and attention in helping to plan the trip, through to the efficiency of the agents on the ground in India – was handled brilliantly. An absolutely first-class service all round.
- Matthew Annable, Rajasthan, India
Ampersand’s preparation, attention to detail and interaction before and during our trip show exactly why good travel agents have a role in today’s internet booking age. They were a delight to deal with!
- Mr David Wallace, North India