Varanasi: The holiest of holy cities

Varanasi is a place that I have been wanting to visit ever since my first trip to India, many years ago. Always described as ‘intense’ by those who have visited it, I have always been intrigued as to what this holiest of holy cities was really like in the flesh. The truth is that Varanasi is intense; a frantic city made up of ancient narrow back lanes where life, death, and everything in between, come into contact. Contrast this with the awe-inspiring magic and beauty of the ghats, at sunrise and at sunset, and the ancient crumbling ruins of Sarnath, where Buddha preached his first sermon, and you can begin to understand why Varanasi inspires, excites and exhausts. However, for those who love India, Varanasi is a must – it feels as though it is the living, breathing, pumping heart of the Hindu religion. Varanasi’s ghats, bordering the mighty Ganges (Ganga) river, stretch for miles to the North and South of the city centre. A boat ride at both sunrise and sunset is an essential part of experiencing this unique place – as both times of the day offer completely different sights to be seen. On our first evening we boarded a boat and sailed south, stopping as the darkness descended to observe the evening aarti – a daily ceremony conducted by Hindu priests, accompanied by drumming, as fervent pilgrims and sadhus (holy men) look on. We lit hand-made candle offerings, made prayers and set them afloat on the Ganges. Following the aarti the city comes alive with activity, with people shopping, eating and walking through the streets. We tried lassi (a local yoghurt drink) and chai made at a local stall, which were both delicious. 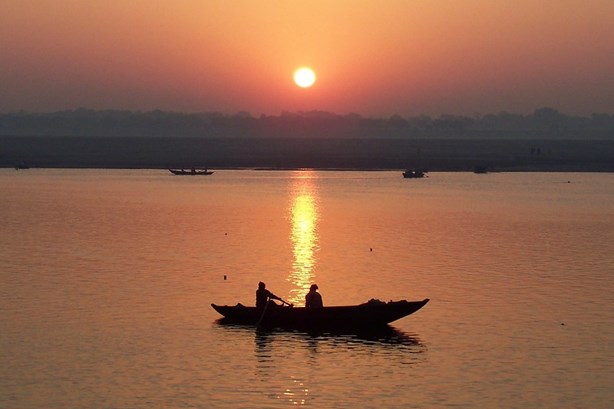 We rose early the following morning and headed back to the ghats to be on the river by sunrise. The morning offers a stark contrast to the evening and I loved observing men, women and children bathing in the river, the morning pujas, children reciting holy texts, cremation fires smouldering, small market stalls being set up, holy men and cows strolling along the ghats and the sun rising over the multi-coloured buildings and temples that border the water. I loved watching the city come alive. In addition to the activity along the ghats, Varanasi has much to visit in the city itself; we recommend Vishwanath Temple and Gyan Vapi Mosque which sit side by side. Any city tour should definitely include a visit to the Benares University museum, Bharat Kala Bhavan, which is home to an impressive collection of miniature painting, contemporary Indian art and ancient sculpture.

Sarnath
Although visually not very impressive, Sarnath is a major site for those interested in Buddhism and archaeology. The small museum appears underwhelming on first appearances but is home to some of India’s major pieces of ancient sculpture and art – including Ashoka’s Lion Capital, which is, after small sculptures from the Indus Valley Civilisation, one of the oldest surviving pieces of sculpture to be found in the subcontinent. The deer park at Sarnath was also the location of Buddha’s first sermon, so became a major Buddhist centre of learning and sculpture. Although only one major stupa remains, the park is an interesting place to walk around – especially to observe the diversity of Buddhist tourists that have come from around the world to pay their respects.

Our base in Nadesar was the leafy spacious compound which comprises both the Taj Gateway and the colonial-era Nadesar Palace. Both are great, while very different, and allow you some much needed peace and quiet in between sightseeing. We loved the large swimming pool at The Gateway and the spacious stately home like feel of Nadesar Palace, with its high ceilings, wooden floors and historic memorabilia; taking breakfast and dinner on the terrace accompanied by a flute player allowed for a calming start and end to the day. Difficult to articulate just how good the service from you and your team really was. We know you will continue to do well and hope we have the chance to seek your assistance again before long.
- Mr & Mrs Manson, North India
Ampersand provided a bespoke and flexible holiday, tailored to my every whim. Their highly professional staff had only one goal which was to arrange an exceptional holiday and some unforgettable experiences in India. I have no hesitation in fully recommending them and they will be the first company I approach in the future - 10/10
- Anonymous, India
I would recommend Ampersand without any hesitation!!! The best travel agent that I’ve ever had. Everything – from the individual care and attention in planning the trip, through to the efficiency of the agents on the ground in India – was handled brilliantly. An absolutely first-class service all round!
- Matthew Annable, Rajasthan, India
I had a very lovely time and was looked after splendidly. My first visit to India could not have been better, save for being longer! But I shall return at some point and I shall look to you to make the arrangements.
- Matthew Nicklin, North India
So many highlights to choose from! The hotels were amazing but Maya Villa was a highlight… I loved just hanging out in the hammock reading my book and watching the peacocks chase the cows!
- Krista Weir, Sri Lanka
We had a wonderful holiday - everything was perfect. Thank you for helping us to make a thoughtful plan to enjoy and make most out of our trip. The places we visited, the guides, the transportation and driver, the hotels selected... Everything was great!
- Jaime Benitez, South India
Everything you did for us whilst we were away was hugely appreciated, and Ampersand has been exemplary in every way. I'll always recommend you!
- Mr Richard Stoughton, Sri Lanka
I thought the Ampersand team was outstanding. We couldn’t have hoped for anything more.
- Mr Geoffrey Johnson, India
Without question, you put together the best trip I have ever taken. We were shown around like visiting dignitaries, the hotels were fantastic and the itinerary was just right. Everybody I know will hear about how amazing Ampersand is!
- Leslie Siben, India
Ampersand’s preparation, attention to detail and interaction before and during our trip show exactly why good travel agents have a role in today’s internet booking age. They were a delight to deal with!
- Mr David Wallace, North India