WHAT TO DO IN CHINA

China is whatever you want it to be! The endlessly varied landscapes, fascinating antiquities, buzzing cities, exciting activities and unique culture can cater for all interests. Whether you’re a shopaholic, a family keen on trekking, a history buff or honeymooners in search of serenity and pampering, China has the holiday for you.

China is the new home of the modern ‘megalopolis’. The major cities are worlds in themselves and can keep visitors busy for many days if only they have the time. Where better to start than the capital, Beijing, which boasts the iconic Forbidden City and Tiananmen Square (presided over by Chairman Mao’s portrait). Just a short drive from the city will bring you to some stunning sections of the Great Wall which perhaps best epitomizes the incredible sense of industry for which China is now known. It would be a crime to visit China without taking in the Terracotta Army in Xi’An. Vast buildings house a vast army of life-sized soldiers, horses and chariots. The army was built and buried to accompany a great emperor to the afterlife 1,800 years ago. No two of the roughly 9,000 figures are the same.

A short hop from Xi’an is the picturesque walled city of Pingyao. Probably the best preserved example of an ancient city wall, Pingyao’s crenelated defence has regular towers and watchtowers and has won UNESCO heritage site status. The city’s atmospheric alleyways and thoroughfares give an excellent idea of Chinese life pre-communism and are home to the country’s first bank which is now an interesting little museum.

Over by the coast you’ll find Hangzhou which is a peaceful garden city great for unwinding after sightseeing in other destinations. Being paddled along on the serene Xilu Lake is a wonderful way to pass a morning and the lakeside hotels are some of the most relaxing in China.

Hangzhou to Shanghai is a short connection but the ultra-modern commercial hub of China feels light-years away. A blend of East and West swirls throughout this glittering city of skyscrapers, high-end retail, gastronomic delights, luxury hotels and of course the world-famous Bund district.

Much like Shanghai with its former foreign concessions, Hong Kong is also has a unique collision of Europe and Asia. The only longstanding western colony in China, Hong Kong contains glimpses of a Victorian-envisaged settlement scattered between the densely packed, high-rise city of today. Take the celebrated Star Ferry across the harbour or climb to Victoria Peak for the best views of perhaps the most exciting city in the Far East.

Northern and coastal China can seem a little urban-centric so a stint in the South is a welcome remedy to the concrete jungles. Here you’ll find actual jungles interspersed with most of the most picturesque landscapes imaginable.

A meandering cruise down the Li River in Guanxi Province from Guilin to Yangshuo will take you through a beautiful morass of jagged limestone karst mountains jutting out of a carpet of fertile farmland. The landscape is one of China’s most marvellous and is sometimes referred to as “Halong Bay on land”. At the end of the cruise, Yangshuo has a couple of peacefully tucked away resorts where an indulgent spa treatment never goes amiss.

From the quintessential “Dragon’s Backbone” rice terraces at Longsheng to the quaint Tibetan mountain settlements around Shangri-La, Yunnan Province has it all. Wander the paved streets of the moat-ringed, ancient kingdom capital Dali or trace the waterways in UNESCO-listed Lijiang, the “Venice of the Orient”, in the shadow of majestic Jade Dragon Snow Mountain. 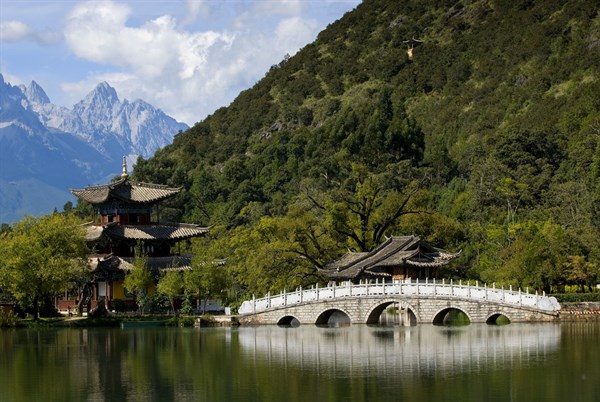 Further to the north, the mountainous forests of Sichuan province are home to the international mascot of wildlife conservation: the giant panda. At Chengdu’s Panda Breeding and Research Centre, visitors can hold baby pandas and observe adults living in their habitat. Sat on the edge of the Tibetan plateau, Sichuan also has a prevalence of Buddhism with several fascinating sites, Wenshu Temple foremost among them. The Sichuanese cuisine is also one of China’s most famous (and spiciest) with kung-po chicken the best known to foreigners.

WHERE TO STAY IN CHINA

The Chinese were late to the concept of luxury hotels but they’ve caught up with the rest of the world really quickly over the last decade or so. Visitors can now truly travel in style.

The Aman at Summer Palace is set in pavilions of the late Ming dynasty imperial summer retreat. The unique private access to the Palace through a secret back door is a real bonus but this hotel is a stand alone classic with a signature Aman Spa for some truly spoiling treatments. 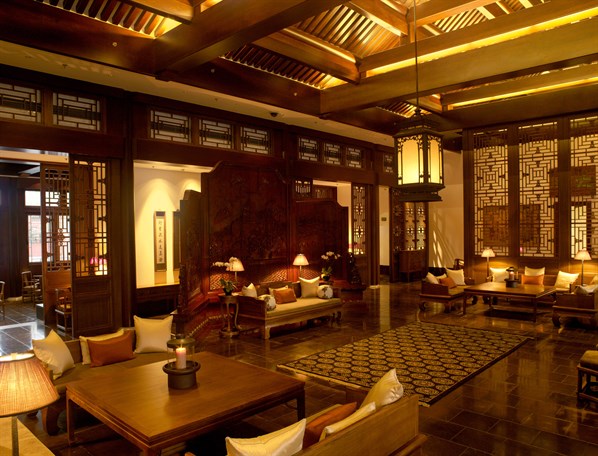 For jaw dropping views of Pudong's skyline standing proud across the water, The Peninsula, Shanghai is the obvious choice. Lavishly decorated in 1930s style with some of the most comfortable rooms we've experienced, this hotel is hard to beat. The rooftop bar is the most astounding in China and the nightscapes it offers are unforgettable. An Ampersand Top 10 Lux City Hotel.

Ten restaurants (two Michelin starred), world renowned service, elegance-defining decor and legendary views of the Harbour...the Mandarin Oriental Hong Kong has it all. The brand's first and flagship hotel stays at the cutting edge by frequently executing design updates. As well as the nearby shopping and dinning and the lively night scene, the sheer style and quality boost this award winner firmly into our favourites.

For a restful stay in tranquil Hangzhou, you couldn't do better than the Amanfayun, Hangzhou. Set amidst tea fields and lush bamboo groves by picture perfect Xilu lake, this hotel is just off the Fayun Pathway along which Saffron-robed monks potter past during the day. The 42 rooms and suites are laid out in the resort in the form of a traditional Chinese village and are all made with traditional techniques. One of the most atmospheric properties in China.

Combining all the best aspects of the first two Aman properties in China, Amandayan in Lijiang is a triumph in design, elegance and attention to detail. The hilltop location at the heart of Lijiang Old Town provides both breathtaking views and enviable serenity. The entire property is built in the traditional architectural style of the local Naxi hill tribe using locally-sourced and beautifully finished Himalayan pine. Visiting the spa and swimming pool feels like a spoiling journey into a Ming-era bath house and the restaurant excels in the many diverse regional cuisines of China as well as perfected Western dishes. Aman’s newest property is not one to miss.

Perched on a ridge among dizzyingly pretty rice terraces, the Li'An Lodge in Longsheng is the passion project of artist Karen Su and is truly far from the madding crowd. There are no roads or cars in the village, only quaint stone footpaths. The lodge was built entirely with the traditional Chinese peg and groove technique so there's not a single nail in the entire building. The uncluttered rooms are a pleasing blend of wood panels, wood carvings and memorable Chinese art. Nestled on the edge of the Tibetan Plateau, the tiny town of Shangri-La is a hidden haven at 3,200m altitude and surrounded by permanently snow-capped mountains. As ever, Banyan Tree has assimilated their lodge to the local Tibetan culture. The Banyan Tree Ringha is a study in perfect isolation. All the rooms are set in Traditional Tibetan farmhouses with wooden balconies enjoying far-reaching alpine views. A perfect sanctuary from the sometimes testing pace of modern China.

Less than a third of those living in the autonomous region of Xishuangbanna are Han Chinese so there's a tangibly different flavour to the river town of Jinghong. Set on the banks of a sweeping curve of this river, the Anantara Xishuangbanna Resort & Spa provides both ravishing scenery  and contemporary luxury. Private plunge pools with tropical gardens are rendered even more enjoyable by the exclusive butler service.

Ampersand’s preparation, attention to detail and interaction before and during our trip show exactly why good travel agents have a role in today’s internet booking age. They were a delight to deal with!
- Mr David Wallace, North India
Difficult to articulate just how good the service from you and your team really was. We know you will continue to do well and hope we have the chance to seek your assistance again before long.
- Mr & Mrs Manson, North India
I thought the Ampersand team was outstanding. We couldn’t have hoped for anything more.
- Mr Geoffrey Johnson, India
I had a very lovely time and was looked after splendidly. My first visit to India could not have been better, save for being longer! But I shall return at some point and I shall look to you to make the arrangements.
- Matthew Nicklin, North India
Ampersand provided a bespoke and flexible holiday, tailored to my every whim. Their highly professional staff had only one goal which was to arrange an exceptional holiday and some unforgettable experiences in India. I have no hesitation in fully recommending them and they will be the first company I approach in the future - 10/10
- Anonymous, India
Without question, you put together the best trip I have ever taken. We were shown around like visiting dignitaries, the hotels were fantastic and the itinerary was just right. Everybody I know will hear about how amazing Ampersand is!
- Leslie Siben, India
I would recommend Ampersand without any hesitation!!! The best travel agent that I’ve ever had. Everything – from the individual care and attention in planning the trip, through to the efficiency of the agents on the ground in India – was handled brilliantly. An absolutely first-class service all round!
- Matthew Annable, Rajasthan, India
Everything you did for us whilst we were away was hugely appreciated, and Ampersand has been exemplary in every way. I'll always recommend you!
- Mr Richard Stoughton, Sri Lanka
So many highlights to choose from! The hotels were amazing but Maya Villa was a highlight… I loved just hanging out in the hammock reading my book and watching the peacocks chase the cows!
- Krista Weir, Sri Lanka
We had a wonderful holiday - everything was perfect. Thank you for helping us to make a thoughtful plan to enjoy and make most out of our trip. The places we visited, the guides, the transportation and driver, the hotels selected... Everything was great!
- Jaime Benitez, South India