The Japanese culture throughout the ages, has attached ceremony to every part of life. No element was allowed to descend into mundane squalor or ugliness that pervaded western societies. This sense of formality and ritual pervaded the world of the courtesans of ancient Japan. Legal and accepted from the 1100's until 1956, the highly prized role of the courtesan flourished as a respected and adored part of society. Some of the most beautiful art to be found portrays these 'butterflies of love' with all the symbolism and nuances of a high civilisation.

In the 1600's the old Imperial city of Edo (now Tokyo) created a pleasure quarter, known as 'Yoshiwara'. This haven of tea ceremonies and sensuality was moated, walled and had a single entrance. The 20-acre area became a city within a city - housing 2,500 ladies and a further 7,000 maids, guards and flunkeys. Courtesans were transformed into 'aristocratic' women and elevated to great honour by visiting warlords and important merchants. Their costumes were vividly captured by the great artists of the day. Kimonos were works of art in themselves, thick brocade sashes (obi) and padded swathes of silk (uchikake) along with extravagant coiffures brimming with trinkets. Particular detail was paid to the neck - seen as the most desirable element, as well as cultural ideals of beauty that would seem strange to us today, such as a blackening of the teeth. 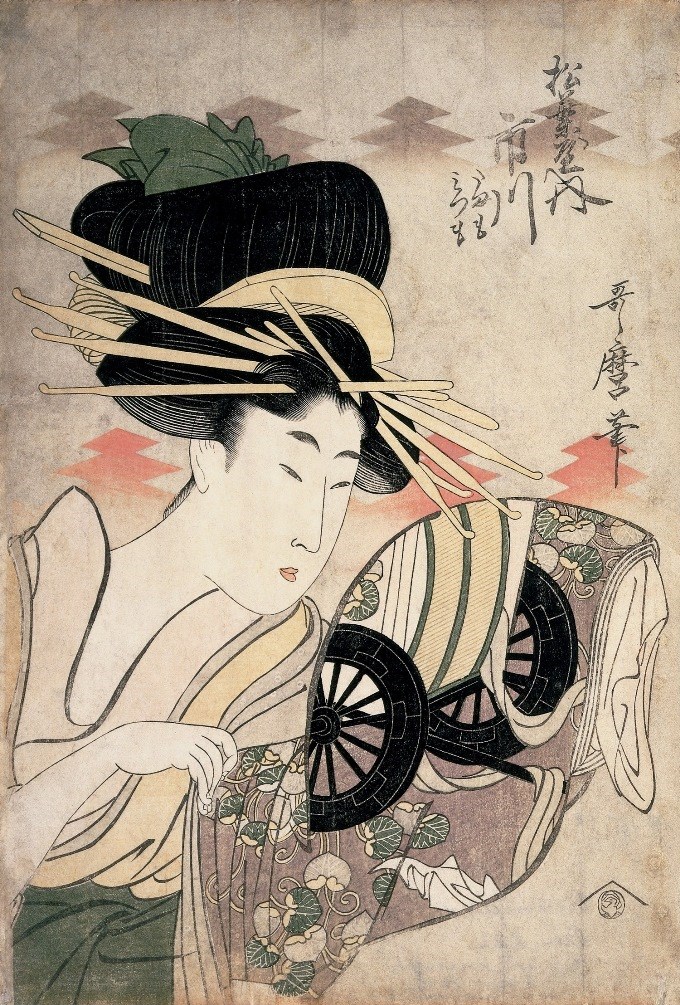 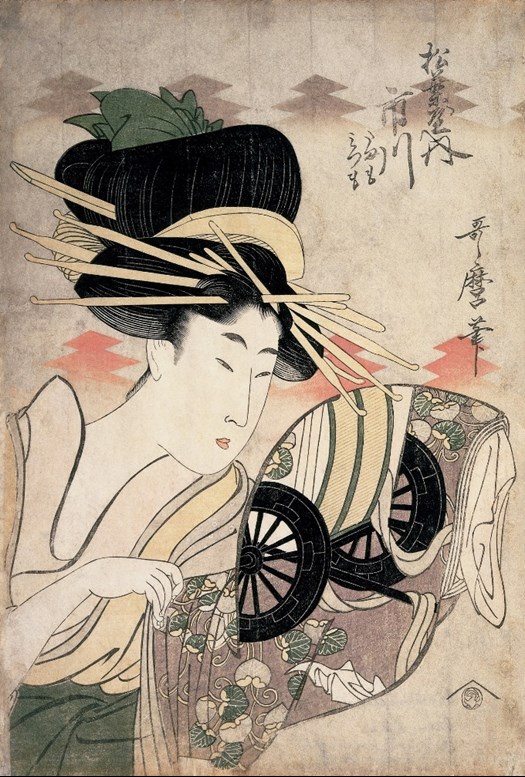 Contemporary paintings from the golden age of the Yoshiwara are fascinating in their meticulous documenting of the lives of the ladies of pleasure. We see a courtesan and her lover admiring the pale pink blossom accompanied by a lacquer bento box for a spring picnic. Other accessories depicted in these detailed works are the 'fumibako' in which love letters were kept, and the 'tebako' where makeup (such as rouge and white face powder) was kept. Tottering to meet a client, the ladies are shown with an entourage of servants (each expecting a tip) and the spectacle would settle down to hear the lady sing and play an instrument as a seduction ceremony.

Courtesans were collectively known as 'Bijjin' or '美女', "beautiful woman" and had all the arts and graces needed to captivate. In the 18th century the school of 'ukiyo-e' (The Floating World) rose under the painter Toyoharu to concentrate on depicting the Bijjiin for infatuated patrons to have in their homes. Robes embroidered with dragons and phoenixes lent an air of lavish wealth while the courtesan's name and her house was also recorded. Painted on silk or paper, which were then made into enormous scrolls, the paintings evolved into woodblock prints due to huge demand so they could be easily reproduced. Rather like the celebrities of today, the ladies were held up as the ideals of beauty with the costumes and hair details becoming more elaborate as the 18th century galloped on. The subtle details render these images akin to classical literature and make the paintings masterpieces in themselves - how entrancing to see their elegant, ivory hands practicing calligraphy or opening a box decorated with a lacquer crayfish. They are identifiable from other strands of female society, like Kabuki actresses or Geishas, by details such as their high clogs and white powered feet. Unlike other paintings around the subject, such as Indian miniatures, the ladies are always fully clothed. The sexual frisson is delicately included in poses where we see the subject coyly keeping the corner of a headscarf in her mouth or lowering a lantern in a room where symbols of a male visitor appear or flying on a crane with scarlet lips. 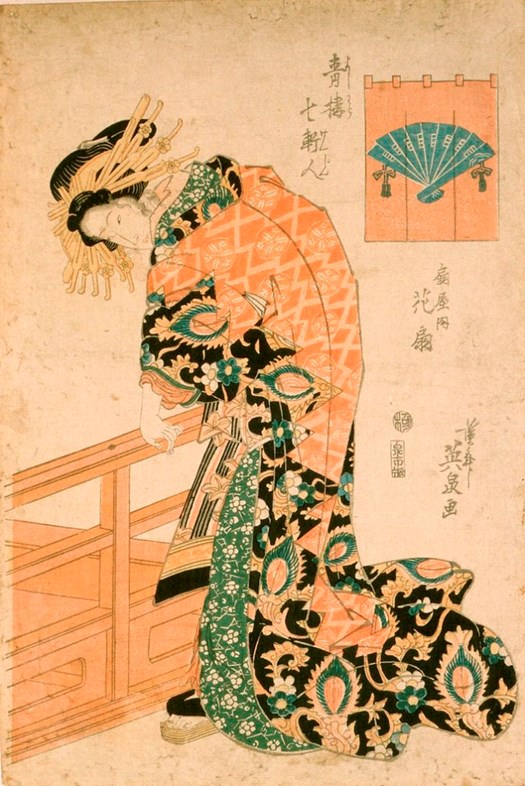 At the waning of the golden era of Edo, artists became less refined and imported artificial colours from the west losing much of the magic of natural colours. The traditions of the Beijin-ga prints were carried on by pupils of the Utagawa School, and those of Ando Hiroshige. This vanished world of Japan's courtly heritage awaits discovery by anyone interested in the Far East and its unique culture.

For more information or to start planning your tailor-made holiday to Japan please contact us:

Everything you did for us whilst we were away was hugely appreciated, and Ampersand has been exemplary in every way. I'll always recommend you!
- Mr Richard Stoughton, Sri Lanka
I would recommend Ampersand without any hesitation!!! The best travel agent that I’ve ever had. Everything – from the individual care and attention in planning the trip, through to the efficiency of the agents on the ground in India – was handled brilliantly. An absolutely first-class service all round!
- Matthew Annable, Rajasthan, India
Difficult to articulate just how good the service from you and your team really was. We know you will continue to do well and hope we have the chance to seek your assistance again before long.
- Mr & Mrs Manson, North India
Ampersand’s preparation, attention to detail and interaction before and during our trip show exactly why good travel agents have a role in today’s internet booking age. They were a delight to deal with!
- Mr David Wallace, North India
I thought the Ampersand team was outstanding. We couldn’t have hoped for anything more.
- Mr Geoffrey Johnson, India
We had a wonderful holiday - everything was perfect. Thank you for helping us to make a thoughtful plan to enjoy and make most out of our trip. The places we visited, the guides, the transportation and driver, the hotels selected... Everything was great!
- Jaime Benitez, South India
I had a very lovely time and was looked after splendidly. My first visit to India could not have been better, save for being longer! But I shall return at some point and I shall look to you to make the arrangements.
- Matthew Nicklin, North India
Ampersand provided a bespoke and flexible holiday, tailored to my every whim. Their highly professional staff had only one goal which was to arrange an exceptional holiday and some unforgettable experiences in India. I have no hesitation in fully recommending them and they will be the first company I approach in the future - 10/10
- Anonymous, India
Without question, you put together the best trip I have ever taken. We were shown around like visiting dignitaries, the hotels were fantastic and the itinerary was just right. Everybody I know will hear about how amazing Ampersand is!
- Leslie Siben, India
So many highlights to choose from! The hotels were amazing but Maya Villa was a highlight… I loved just hanging out in the hammock reading my book and watching the peacocks chase the cows!
- Krista Weir, Sri Lanka