The heady horizons of South Asia is undeniably the world’s leading destination for those seeking a spiritual reset. From the goddess rivers of India, laden with flowers, singing and candles as the sun sets, to the timeless temples of Sri Lanka and jewel-laden stupas of Old Burma – South Asia’s holiest sites would take a lifetime to experience in their fullness. We have spent two decades tirelessly seeking out the most impacting, soulful and life-changing of these unique sites. Below are some of the most inspiring places of pilgrimage that once visited can never be forgotten. A touch of Tibet in the mountain kingdom of Ladakh, Thiksey Monastery is without doubt, one of the most transporting places in the world. To sleep in the shadow of the snow-peaked Himalayas in tented decadence at The Ultimate Travelling Camp’s Chamba Camp and rise at dawn to attend morning prayers in the frescoed hall, surrounded by robed monks of all ages, is to surrender to another realm. The gentle spirit of the Rinpoche (head Lama) pervades the monastery and a coveted private audience offers the chance to ask life’s searching questions. 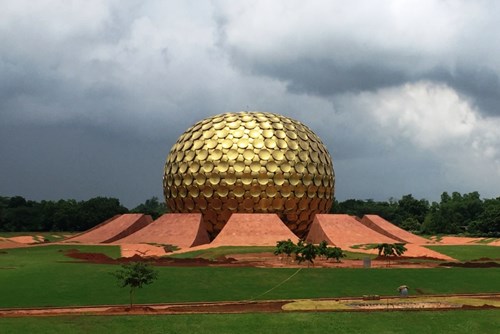 It is said that true faith is built around community and the South Indian creative and spiritual hub of Auroville has a tangible aura of peace at first sight. Just outside the charming Indo-French seaside town of Pondicherry in Tamil Nadu, Auroville was established in 1968 by ‘The Mother’, an enigmatic figure who wanted to create a town to ‘realise human unity’. The community began life around a solitary Banyan tree and now encompasses a vibrant and thriving hub of people from all over the globe. A place to linger, to belong and to be earthed. 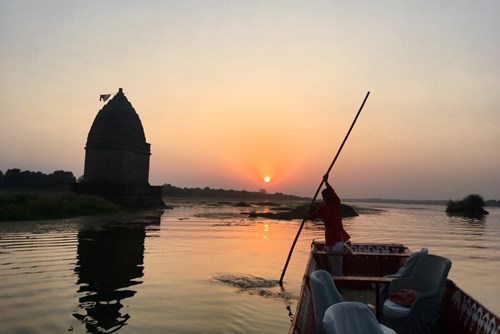 Imagine a lone temple perched in the middle of a vast holy river, worshipped by Hindus as the very centre of the universe. The raw power and serenity of this corner of central India is palpable, culminating in the Sacred River Festival held here by Prince Richard Holkar of Ahilya Fort each February. Ahilya Fort is itself an almost mystical residence of an ancient family of warriors and aesthetes. Glorious temple architecture, scenic ghats, candlelit dinners on the fort’s Jasmine-scented terrace overlooking the waters and pilgrim throng... Maheshwar is indeed heaven on earth. The place of the Buddha’s enlightenment, Bodhgaya is the very heart of Buddhism distilled into a colourful Indian town on the ghat-lined banks of the Falgu River. Founded as a holy site by the Emperor Ashoka in 250 BCE and recorded by Chinese pilgrims as early as the 7th century, Bodhgaya sports shrines and temples by people from Japan, Taiwan and Vietnam, among others. The UNESCO World Heritage-listed Mahabodhi Temple has relics dating from 174BC, while the Hindu Vishnupad Temple has a worshipped footprint of Vishnu in a block of basalt.

A relatively undiscovered complex of religious ruins and known as the birthplace of Buddhism in Sri Lanka, Mihintale is a breathtaking sight set over a 1,000 metre hill. Climbing up the ancient stone steps is a meditative exercise in itself, soaked in atmosphere and reverence. Discover the faded monastery, exquisitely restored 1st century stupa and, at its peak, a towering white Buddha. The Enlightened One is recorded as visiting the site. Just 15 kilometres from Anuradhapura, this is one of the highlights of the Sinhalese Cultural Triangle. Mihintale is best explored while based at the secluded Frangipani-adorned villas of Ulagalla, one of our favourite eco-retreats and set in 60 acres of natural Sri Lankan jungle and green paddy fields. 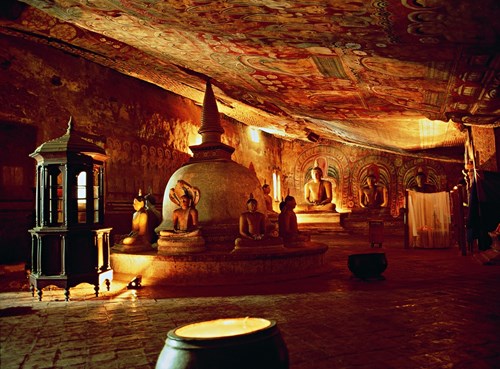 Journey to the heart of Sri Lanka and experience this world heritage site, 75 kilometres north of Kandy, the ancient capital of the Sinhalese kings. Called a ‘treasure trove of priceless Buddhist and Hindu iconography’, Dambulla Cave Temple’s beauty and holiness radiates from over 150 Buddha statues and intricately carved pantheon of Hindu idols set against a backdrop of glorious hand-painted murals. The rock paintings date back to 2 AD but the colour and depth is astonishingly preserved across the five caves. Inhabited by forest-dwelling Buddhist monks for centuries, the caves echo with a million prayers and devotions. 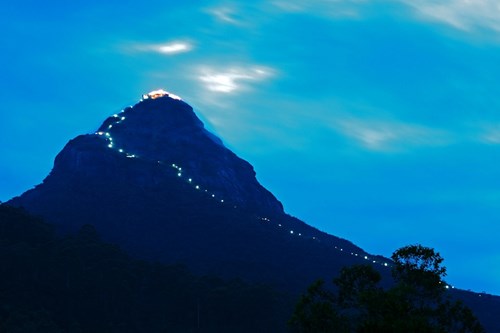 One of the highest mountains in Sri Lanka and deeply revered by the four major religions of the island, Adam’s Peak is also known as Sri Pada, loosely translated from Sanskrit as ‘the sacred foot’. A footprint-shaped imprint on the summit is held by Buddhists as that of Buddha, while Muslims and Christians believe it to be a footprint of the the cast-out Adam, the first human and Hindus revere it as Shiva’s mark. The majestic views and otherworldly spell of the peak sets it apart from anywhere else in the country. The trails that ascend through the forest offer glimpses of tea plantations, endless birdsong, reverent greetings from other pilgrims and a marked sense of peace. December to May is the favourite time for visiting but the peak can be scaled in any season. 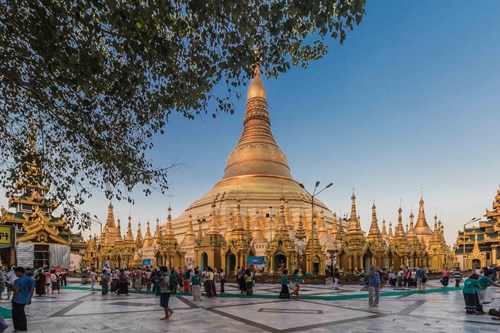 ‘I dreamed of Rangoon’... Sail away to Yangon, the faded shimmering capital of Myanmar, and get lost in the shrines, churches and temples scattered across the city, humming with chantings and incense. Perhaps the world’s oldest Buddhist pagoda, the 2,500-year-old Shwedagon Pagoda, is a once-in-a-lifetime sight to behold. Peaked by a golden stupa encrusted with thousands of precious stones, sapphires, rubies and topaz and, at the very top, a single 75-carat diamond, the pagoda holds eight hair strands of the Buddha and other sacred relics. One of the wonders of the religious world, this is a very living pilgrimage pulse. Each March is the scene of a unique festival, one of the biggest in Asia. 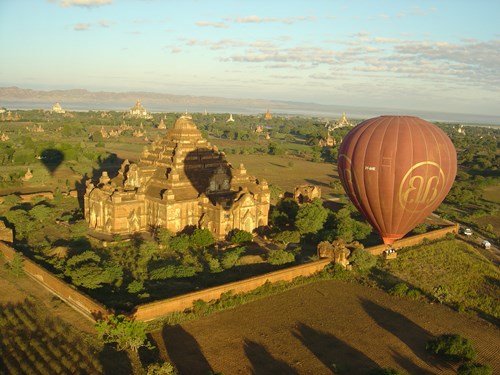 The awe-inspiring footprint of a fervently devout and long-lost Buddhist kingdom, Bagan is the city of 2,000 temples. Originally five times that number, but vanquished by the Mongols, Bagan is still one of the most impressive architectural sights on the globe. Take a cruise up the  Irrawaddy River to this mythical wonder and climb into a hot-air balloon for a panoramic birds-eye view of the endless stupas strewn across the plains. A sunrise climb to the top of one of the temples offers a spectacular moment of reflection and meditation as the landscape glows with colours. Look out for the dazzling Shwezigon Pagoda with its endless copper plates and the rich frescoes of the Ananda and Upali Thein Temples. End your days by the serene pool of the perfectly-situated Thiripyitsaya Sanctuary Resort.

Ampersand’s preparation, attention to detail and interaction before and during our trip show exactly why good travel agents have a role in today’s internet booking age. They were a delight to deal with!
- Mr David Wallace, North India
Difficult to articulate just how good the service from you and your team really was. We know you will continue to do well and hope we have the chance to seek your assistance again before long.
- Mr & Mrs Manson, North India
I would recommend Ampersand without any hesitation!!! The best travel agent that I’ve ever had. Everything – from the individual care and attention in planning the trip, through to the efficiency of the agents on the ground in India – was handled brilliantly. An absolutely first-class service all round!
- Matthew Annable, Rajasthan, India
I had a very lovely time and was looked after splendidly. My first visit to India could not have been better, save for being longer! But I shall return at some point and I shall look to you to make the arrangements.
- Matthew Nicklin, North India
Without question, you put together the best trip I have ever taken. We were shown around like visiting dignitaries, the hotels were fantastic and the itinerary was just right. Everybody I know will hear about how amazing Ampersand is!
- Leslie Siben, India
Ampersand provided a bespoke and flexible holiday, tailored to my every whim. Their highly professional staff had only one goal which was to arrange an exceptional holiday and some unforgettable experiences in India. I have no hesitation in fully recommending them and they will be the first company I approach in the future - 10/10
- Anonymous, India
Everything you did for us whilst we were away was hugely appreciated, and Ampersand has been exemplary in every way. I'll always recommend you!
- Mr Richard Stoughton, Sri Lanka
I thought the Ampersand team was outstanding. We couldn’t have hoped for anything more.
- Mr Geoffrey Johnson, India
We had a wonderful holiday - everything was perfect. Thank you for helping us to make a thoughtful plan to enjoy and make most out of our trip. The places we visited, the guides, the transportation and driver, the hotels selected... Everything was great!
- Jaime Benitez, South India
So many highlights to choose from! The hotels were amazing but Maya Villa was a highlight… I loved just hanging out in the hammock reading my book and watching the peacocks chase the cows!
- Krista Weir, Sri Lanka