Sri Lanka is a paradise for lovers of architecture. The island is dotted with villas and bungalows set like jewels in sweeping gardens and plantations waiting to be explored. Many of these buildings were conceived by the man called ‘Sri Lanka’s greatest architect’, Geoffrey Bawa (1919-2003).

Often hailed as the father of the ‘tropical modernist’ movement, the story of this visionary designer is as fascinating as his creations. Born to a successful lawyer, the Anglo-Muslim Justice Bawa and his Dutch-Sinhalese wife Bertha, Geoffrey and his elder brother, Bevis, enjoyed a privileged childhood. In a society where being of mixed race was historically often seen as an impediment to social acceptance, the Bawas were wealthy, cosmopolitan and mixed in the Ceylonese elite circles of the day.

Bawa studied at Cambridge University following in the footsteps of his father and grandfather then followed them into law, qualifying in 1944. He returned to Colombo to work briefly in a law firm but used his inheritance to travel across the Far East, the United States and Europe. After nearly settling in an Italian villa, Bawa returned to his native island and bought a rundown rubber plantation, which opened his eyes to the joy of garden design and then of buildings. This personal revelation led Bawa to train as an architect in his late thirties. 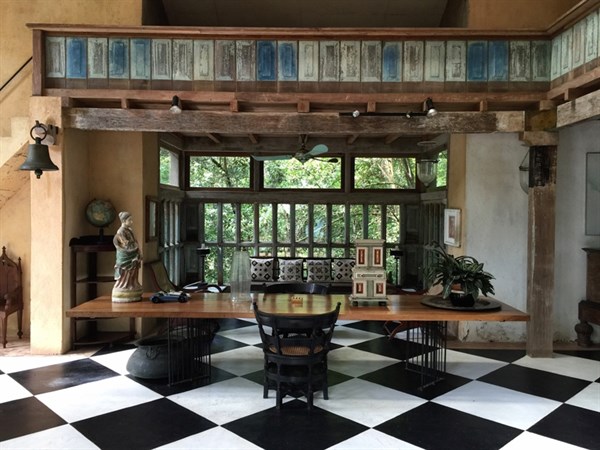 A natural eye for beauty and a deft cultural understanding led to Geoffrey quickly becoming one of Sri Lanka’s most prolific designers. His distinctive creations are liberally scattered throughout the island, typified by monochrome palettes, pavilions and courtyards, and the marriage of traditional and experimental.

Bawa was not a designer confined, while his fingerprint can be most clearly seen in tropical metropolis Colombo, he worked on hotels, villas, Buddhist monasteries and the breathtaking Houses of Parliament at Kotte, which surges triumphantly out of an artificial lake. 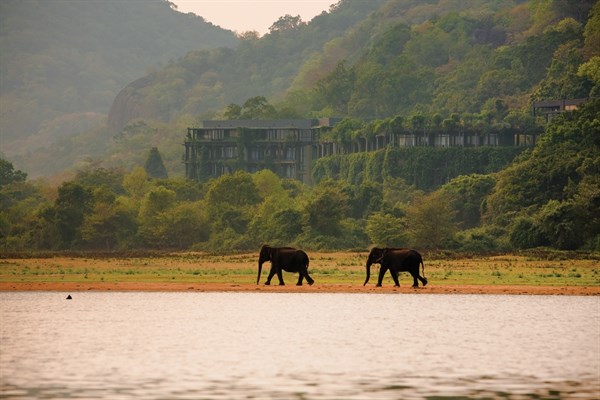 Bawa’s impact on the fast-growing luxury travel scene was revolutionary and has never been rivalled: he designed 35 hotels between 1965 and 1997, of which 13 were built in Sri Lanka, including the iconic Bentota Beach Hotel.  He is credited with creating fully sustainable buildings long before the notion was fashionable. The vision was always a long-haul one, sometimes confounding onlookers, staff at the 20-year old Kandalama Hotel tell of Bawa describing the newly-built hotel as peering from under a canopy of lush vegetation, much to their bemusement. Now, of course, long after his passing, it is exactly that.

To his many admirers, his spirited touch was unparalleled. ‘He was a man who could civilise a landscape with a pot’, according to close associate Ulrik Plesner while another fellow architect Christopher Beaver praises his designs as: ‘so perfect you almost don’t know they are there’. Credited for resurrecting the courtyard house style, beloved of his Muslim and Sinhalese ancestors but previously disapproved of by the British, Bawa drew inspiration from the ancient local manor houses while infusing them with an unmistakably modern aesthetic. Materials were tactile and deeply natural; roofs of half-round Portuguese tiles, walls of plastered brick, smooth satinwood columns, timber latticed windows and rough granite floors. Seamlessly flowing into their environments and focusing on the interplay of light and the interconnecting of the outside with the interiors, Bawa’s buildings were fresh, vital and at their heart, an ode to Sri Lanka, as she grew from independence infancy. 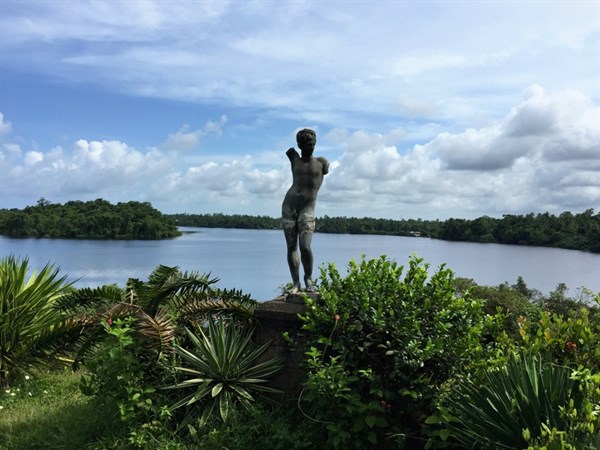 The Lunuganga Estate and Bawa’s Colombo home, ‘Number 11’, are open for public and private tours. Lunuganga is one of Sri Lanka’s great highlights, a pristine garden and villa paying homage to a man who loved them for over 50 years. At Number 11, Bawa combined four individual bungalows in the charming and serene suburb of Colombo 3. Walking through the decorated glass door with its semi-circle moonstone is to chance upon an interior fashioned by genius, full of treasures and surprises.

Bawa’s brother, Bevis, shared his pioneering design ethos and separately created an estate called Brief Garden which is also open to visit and sporting, according to Ampersand Travel’s Chloe Goolden: ‘an utterly encapsulating and eclectic collection’ of sculptures in a pleasingly unmanicured garden.

Bawa’s legacy has been managed since the late 1990s by the Geoffrey Bawa Trust. Against all the odds this small but heroic group has succeeded in maintaining both Lunuganga and Number 11 as living museums to Bawa. Michael Ondaatje, the novelist paid fitting tribute to Geoffrey Bawa with these words:

‘Every artist works on a different scale. A page. A painting. A sonata. A novel. A house. A garden. But essentially they all create, in some ways, self-portraits of themselves. Art is a long intimacy. The scale of the achievement might be grand and take years but it has to be personal and carefully pieced together and specific to its culture.’


For more information or to start planning your tailor-made holiday to Sri Lanka, please contact us:

So many highlights to choose from! The hotels were amazing but Maya Villa was a highlight… I loved just hanging out in the hammock reading my book and watching the peacocks chase the cows!
- Krista Weir, Sri Lanka
I had a very lovely time and was looked after splendidly. My first visit to India could not have been better, save for being longer! But I shall return at some point and I shall look to you to make the arrangements.
- Matthew Nicklin, North India
We had a wonderful holiday - everything was perfect. Thank you for helping us to make a thoughtful plan to enjoy and make most out of our trip. The places we visited, the guides, the transportation and driver, the hotels selected... Everything was great!
- Jaime Benitez, South India
I thought the Ampersand team was outstanding. We couldn’t have hoped for anything more.
- Mr Geoffrey Johnson, India
Ampersand provided a bespoke and flexible holiday, tailored to my every whim. Their highly professional staff had only one goal which was to arrange an exceptional holiday and some unforgettable experiences in India. I have no hesitation in fully recommending them and they will be the first company I approach in the future - 10/10
- Anonymous, India
Without question, you put together the best trip I have ever taken. We were shown around like visiting dignitaries, the hotels were fantastic and the itinerary was just right. Everybody I know will hear about how amazing Ampersand is!
- Leslie Siben, India
Difficult to articulate just how good the service from you and your team really was. We know you will continue to do well and hope we have the chance to seek your assistance again before long.
- Mr & Mrs Manson, North India
Everything you did for us whilst we were away was hugely appreciated, and Ampersand has been exemplary in every way. I'll always recommend you!
- Mr Richard Stoughton, Sri Lanka
Ampersand’s preparation, attention to detail and interaction before and during our trip show exactly why good travel agents have a role in today’s internet booking age. They were a delight to deal with!
- Mr David Wallace, North India
I would recommend Ampersand without any hesitation!!! The best travel agent that I’ve ever had. Everything – from the individual care and attention in planning the trip, through to the efficiency of the agents on the ground in India – was handled brilliantly. An absolutely first-class service all round!
- Matthew Annable, Rajasthan, India